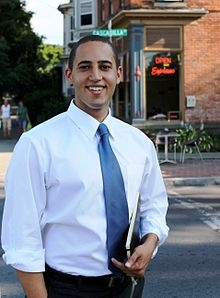 These Executive Orders are the first and second so-called “Muslim Travel Bans,” entitled “Protecting the Nation from Foreign Terrorist Entry into the United States.”

First, on February 16, Myrick and Lavine participated in an amicus brief arranged by New York City and advocating on behalf of numerous impacted municipalities nationwide.

The brief, filed in Darweesh v. Trump in the U.S. District Court for the Eastern District of New York, demonstrated the far-reaching impacts of the first “Muslim Travel Ban” on cities nationwide, and urged the court to enjoin the ban.

Next, on March 13th, the New York Attorney General’s office submitted Lavine’s Declaration of Immediate and Irreparable Harm in support of the State’s Motion to Intervene in Washington v. Trump, the lawsuit in federal court in Washington State challenging the March 6 Executive Order.

The declaration, attached to this release, sets forth data regarding Ithaca’s economic and cultural dependence on its immigrant community. The declaration also outlines the anticipated social and financial impacts to Ithaca as a result of the recent travel restrictions on foreign-born visitors and residents of the community.

Then, on March 14th, Myrick and Lavine joined the City of Chicago in its amicus brief in that same Washington v. Trump case, supporting an emergency motion to enforce a preliminary injunction against the ban.

Next, on March 23rd, Myrick and Lavine joined a large array of cities in an amicus brief filed in federal court in Hawaii urging the grant of a preliminary injunction against the ban.

Most recently, on March 31, Myrick and Lavine joined the City of Chicago and many others in an amicus brief filed in the U.S. Court of Appeals for the Fourth Circuit opposing the Trump Administration’s motion to stay an injunction that was issued against the ban.

Myrick and Lavine stand ready to continue ensuring that Ithaca plays its part in standing against the Trump Muslim Travel Ban, which is as offensive to American values as it is unconstitutional.

The Trump administration’s March Executive Order replaces the earlier version, enforcement of which was halted by court order.