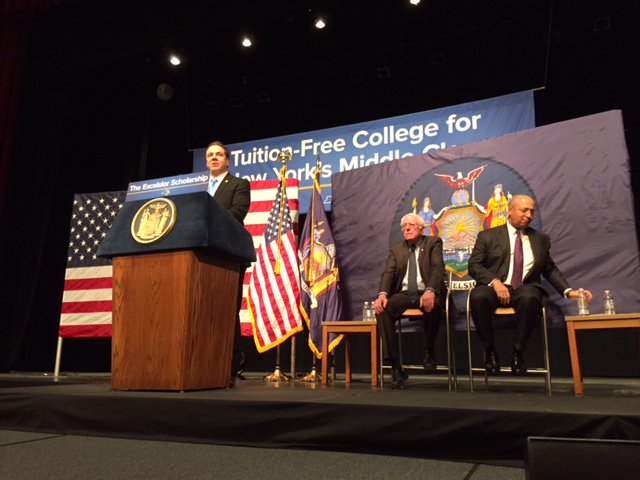 Gov. Andrew Cuomo announced a proposal on Tuesday to provide “free tuition,” to students across New York at SUNY and CUNY schools.

The move is an expensive one, which Cuomo said will cost $163 million to implement and would impact 940,000 students. However, the measure would ensure that those making less than $125,000 per year would be eligible for free tuition at any SUNY school. The measure would also have a full-time requirement, if adopted in it’s proposed fashion.

Just this week, SUNY officials asked for a scaled tuition increase, which was highlighted in a piece on FingerLakes1.com. This proposal, which would need to be accepted by lawmakers in New York State leaves a lot of questions to be answered.

The announcement was made alongside Bernie Sanders, who built much of his campaign for the White House around free tuition. Cuomo said that addressing the cost of higher education for low- and middle-class students and families was of the highest priority.

The plan would be adopted in phases, becoming available for students and families with incomes of less-than-$100,000 in the fall of 2017. The following year, it would become available to those making $110,000 per year — and then would be fully implemented in 2019 when those making up to $125,000 per year would be covered.

Currently, the cost to attend a four-year SUNY school is $6,470. Two-year institutions under the SUNY umbrella cost $4,350 per year.

Zimpher went on to call the move a ‘game-changer’ for those living in New York. The measure would be coupled with current funding methods, which include grants and scholarship programs.

The new program would kick in after those other funding methods were tapped out for each individual student.

It remains to be seen if this issue will be taken up by legislators.