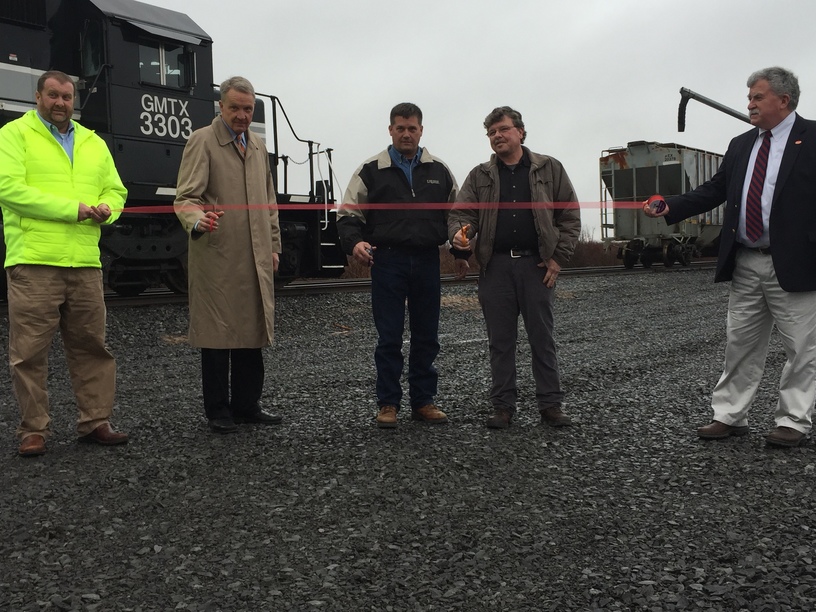 This is not a one dimensional project.That was the resounding message from those who spoke at the Auburn Road Terminal tour that Finger Lakes Railway hosted on Wednesday afternoon. This has proven to be a big year for the railway already. The section where the new terminal resides is celebrating its 175th anniversary, which is a testament to the importance rail plays in New York State’s infrastructure.”This is going to offer a connection like nothing that has been seen before in the region,” said Mike Smith, President of Finger Lakes Railway. The project he was referring to is a rail terminal that promises to become the epicenter of transport for agriculture in the region. In the immediate future, he pointed out, as many as 10 jobs will be added to the Finger Lakes Railway operation. Those jobs, he added, would boost the already impressive median income at Finger Lakes Railway. Smith said, “Our median income is a little over $52,000 per year, plus a full-plate of benefits,” which in his estimation is a major tool for them to recruit the best local employees.The goal is to eliminate the non-local trucking jobs that currently move things into the region. This terminal, according to Finger Lakes Rail is a great start. However, the opposition to this project, believe that it serves as a front to import more trash to the region.Kyle Black, of Seneca Meadows defers to their company’s “spotless environmental record” when talking about how this terminal is going to impact what their operation looks like. Seneca Meadows points out that there will be no more trash coming into the region than currently exists with the addition of this terminal.What will the net benefit be for the Finger Lakes?”A serious reduction of infrastructure stress,” according to Steve Fisk, Vice President and General Manager of Finger Lakes Railway. He said that the benefit of using railways to transport goods is that it is exponentially less expensive to do it. The maintenance cost associated with repairing roadways and bridges, when compared to the cost of maintaining a line of track — is a night and day difference. “You can build these things at a fraction of the cost,” said Fisk. Additionally, it offers a connection that otherwise doesn’t exist. Fisk says the cost is quickly offset by the massive export that exists in the soybean market. Each year, one to two million bushels of soybeans are exported to Asian markets. The soybean market has exploded over the last five years in the Finger Lakes. In that period of time, soybean farming has gone from a relative nothing to being one of the two or three biggest cash crops in the region. This terminal, according to Fisk and others, offers a hand to helping that segment of the market grow even further.However, Smith pointed out that growth has become tough to achieve in New York State. He said, “Each year we lose six to eight percent of our business,” referring to the customers leaving the area — or businesses that stop operations due to rising costs. “This region has a couple advantages. The agriculture industry, led by world-class farmers in both dairy and field crop and research facilities that have helped the agriculture industry a great deal.”
“It’s tough, though,” he admitted “Doing business in New York is difficult. Just like getting people to come to New York is difficult with the tax situation,” he concluded pointing to a somewhat bleak economic outlook for the state.They all concluded that this project, from the beginning, has been about developing something that could be used by all of the industries in the area. Whether it’s agriculture, or something pertaining to the service industry — this new terminal will offer benefits across the board for the Finger Lakes.