South Seneca Central School graduate and Music Director S. Shade Zajac will bring his Genesee Symphony Orchestra to his home town for a concert at the South Seneca High School Auditorium on at 5:00 pm on Sunday May 20th that will include Elgar’s Concerto for Cello and Orchestra, featuring Mimi Hwang on Cello, Howard Hanson’s Symphony No. 2 “Romantic” and other works.   The concert is free, but donations will be accepted on behalf of local Firefighter Brian Reynolds, who is battling cancer.  Refreshments will follow the performance.  The concert is being supported in part by the Lake Country Hometown Music Series of Christ Episcopal Church in Willard which is made possible by a grant from the Delavan Foundation.

Based in Batavia, the Genesee Symphony Orchestra is a dynamic, regional orchestra that presents an ambitious portfolio of concerts for the enrichment of its community through high-quality performance, educational opportunities, guest artists, and partnerships. Founded in 1947, it is one of the oldest civic orchestras in New York State. 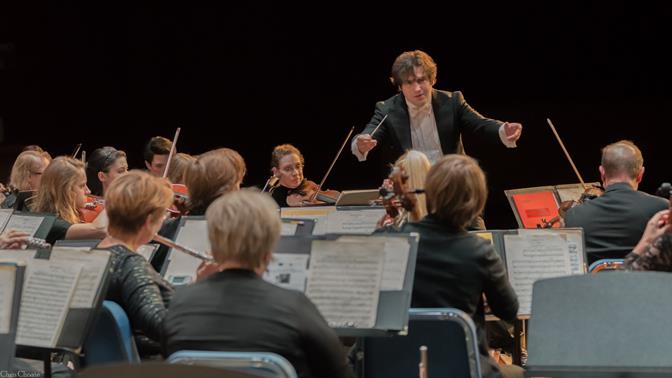 The Orchestra will be joined by Cellist Mimi Hwang for Elgar’s Concerto for Cello and orchestra in E-minor. Hwang, who lives in Brighton, has an impressive background, having studied at New England and San Francisco conservatories, performed with Tokyo and Cleveland string quartets, and earned top prizes in the Banff International String Quartet Competition and the Evian International String Quartet Competition. She has performed throughout North America, Europe and Asia.  She was also Zajac’s teacher and mentor during his years at Nazareth College.  “He and I set lofty goals for him and he did very well,” Hwang said. “There is a bond between a private lesson teacher and a student. Shade is the first student I had that became a conductor.”

“This piece is the first time I’ve been able to work with her,” said Zajac, who in 2016 at 22 became the youngest ever conductor of the GSO. “I studied this piece under her and it’s one of my favorite pieces. She plays it so beautifully. It’s an emotional piece to get through and it’s a wonderful feeling to have that student/teacher relationship. We are friends and colleagues now.” A 2011 graduate of South Seneca Central School and a 2015 graduate of Nazareth College with a degree in Music Performance, Cello, with Conducting and Composition, Zajac is an accomplished cellist, prolific composer, and the founding member of the Asteria Quartet.  He also serves as the Principal Conductor and Music Director of the Finger Lakes Symphony Orchestra.