The ancient Scots’ game of curling sweeps back into the Port of Palmyra Marina at Division Street on the historic Erie Canal, Sunday, February 11th from 1 – 3 pm. The Village of Palmyra and the friends of the Rochester Curling Club invite you to join the fun and give one of the most eagerly anticipated Olympic Winter Games sports a try. The afternoon includes a demonstration game, instruction for beginners, and fun for all ages.

Response to this unique event has been tremendous in past years, often enticing a couple of hundred people to brave the elements for some old time curling. Palmyra Town Clerk and curler Irene Unterborn marvels at the typical turnout, “It’s been amazing to see so many people come out and curl right here in the heart of Palmyra. We hope everybody who’s tried it comes back out and brings a friend, or five!” 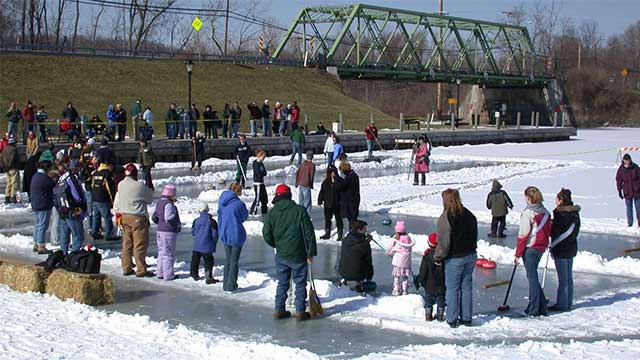 So just what is curling, anyway? Curling is a jargon-rich winter sport in which opposing rinks (teams) take turns delivering their rocks (42-pound polished granite stones) down a 144-foot long sheet (ice alley). Points are scored in each end (inning) by placing your rinks’ rocks closer to the button of the house (center of the target) than your opponent’s rocks. Think bocce.

Each rink consists of four players: Lead (throws first rocks), Second (second rocks), Vice-Skip (third rocks), and Skip (the captain who throws fourth rocks). While one player delivers a rock, two of his or her teammates follow it with brooms poised, ready to pounce and sweep in front of the rock in order to extend its distance and keep its running path straighter. Skips stand at the far end of the sheet reading strategy and calling the shots and the sweeping. But be careful not to hog your rock or burn one with your broom, or it will be removed from play!

Confused? Well don’t be. The friends of the Rochester Curling Club will be on hand to offer an introduction to, and a vocabulary lesson for, their favorite winter sport. They’ll provide the stones, but please bring your boots or sneakers to wear on the ice – no ice-skates, please. Children and other folks who might be less sure of their footing on ice may wish to wear a bicycle helmet for added safety.

Curling on the Canal can only take place if the weather permits, which, in this case, means weather cold enough to maintain an ice covered marina, but not too cold to risk frost bite!

According to event organizer and host William Unterborn, “We’ve had three years without Canal Curling; two because we had no ice at all and one because the temperature with wind chill was 35 below zero! We just need something in between – and no significant January thaw!”

Unterborn advises prospective curlers to check the official Town and Village of Palmyra website at www.palmyrany.com for weather updates during the week leading up to the event. If necessary, a cancellation notice will be posted there. Sorry, no rain or thaw date is planned at this time. Curling is enjoyed around the world, wherever winter sports are played. Scotland is recognized as the spiritual home of curling, having originated there as early the 16th century. In fact, a curling stone was found near the city of Stirling engraved with the year 1511. Like many of the Highland Games, curling is a test of skill and stamina, performed with natural materials at hand.

The game we know today developed chiefly in North America, especially in Canada where curling is a national obsession. Curling in Canada is as popular a participation sport as bowling is in the United States.