The National Weather Service has upgraded expectations of forecasts for parts of the Finger Lakes this weekend. While much of the region will only see a period of light snow, lake effect snow warnings have now been issued for Wayne and Monroe counties.

The National Weather Service said on Friday that a clipper system would bring a quick, burst of general snowfall during the daytime and evening hours. That would be followed by a possibly intense band of lake effect snow, which will impact the northern portions of the region. 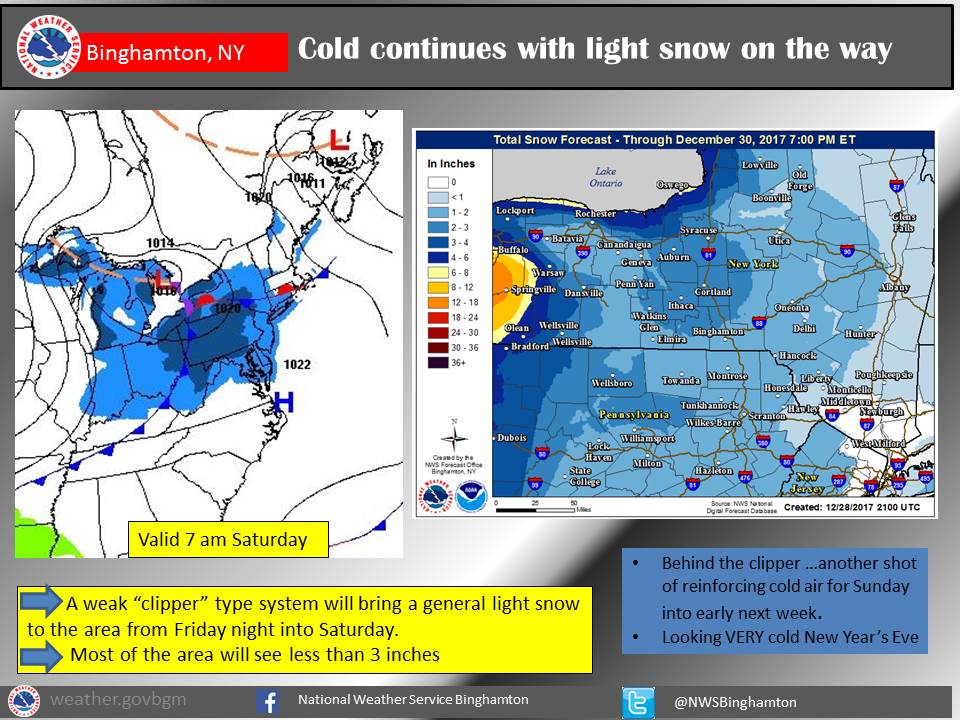 The challenge is another holiday weekend, which feature challenging travel conditions, as well as difficult conditions to be outdoors. New Years Eve on Sunday will feature some of the coldest temperatures the region has experienced all year, with highs only reaching the upper-single-digits.

That night, temperatures will fall to zero, or just above, which will mean anyone heading out — will have to be prepared for bitter cold.

Reduced visibility inside these lake effect snow bands will not be the only travel headache experienced this weekend in the advised area. Wind chills as low as 15 below are expected, which means road treatment will struggle to stick through the weekend.

WHERE: Monroe & Wayne counties
WHEN: Saturday, 2 pm – Sunday, 10 am
WHAT: Heavy lake effect snow expected. Travel will be very difficult. Total snow accumulations of 6 to 12 inches are expected in the most persistent lake snows.

WHERE: Northern Cayuga County
WHEN: Saturday, 2 pm – Sunday, 10 am
WHAT: Lake effect snow expected. Plan on difficult travel conditions. Total snow accumulations of 4 to 8 inches are expected in the most-persistent lake snows.

Additional lake effect #snow will accumulate this afternoon through Sunday morning. Warnings and Advisories have been issued. For more information visit: https://t.co/mU5Ih0yR3b

There will be some scattered snow showers today, and it will remain very cold. Highs only in the teens this afternoon. pic.twitter.com/clBo1XGHSm

Here's the latest on our increasingly long stretch of very cold, wintry conditions for CNY/NEPA. pic.twitter.com/qYTHNIix5Z

Is this #Weather 101? I guess I shouldn't have left a pack of soda in the car with a low temperature of -8? It exploded through the case! @CNYcentral pic.twitter.com/yIT3MmQ69v

Climate tidbit: For #Buffalo, the only date in January to not have a subzero temperature is the 1st. This might change in 2018 as a very cold airmass settles in for the end of 2017 and start of 2018.

A Winter Weather Advisory has been issued in our viewing area. Go to https://t.co/LmVYfje8PF for more details. #ROC pic.twitter.com/xQc92tOgIC