Merry Christmas, George Bailey!, a live radio play based on the movie “It’s A Wonderful Life” will be performed Thursday, Saturday and Sunday in Seneca Falls. The Seneca Community Players who have been entertaining visitors to the annual It’s A Wonderful Life Festival with this reprisal of the original Lux Soap sponsored radio program from 1947, has gathered nearly two dozen actors to bring the stage and street alive with the story’s characters.

Ever since 1936, when Lux Radio Theatre moved from New York to the West Coast to adapt motion pictures into one-hour radio shows, every broadcast began with those compelling words: “Lux presents Hollywood!” and the Lux theme music. 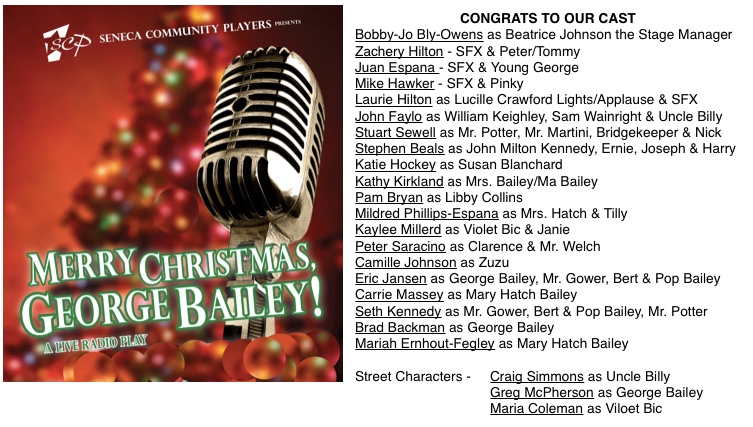 Initially, the series adapted Broadway plays for the radio, but after just two years moved to Hollywood to perform hour-long radio programs live before studio audiences. It became the most popular dramatic anthology series on radio, broadcast for more than 20 years.

The show’s fictional producer through the years changed from John Anthony, to Cecil B. DeMille, and later William Keighly. Another fictional character was Libby Collins, who as a “Hollywood reporter,” made the commercials for Lux Toilet Soap.

Seneca Community Players has adapted the original Lux Radio Theatre version of “It’s A Wonderful Life,” including the commercials as they were broadcast on March 10, 1947 and live sound effects and music, to create Merry Christmas, George Bailey!, directed by Seth Kennedy of Seneca Falls.

SCP will also be providing actors to roam the streets playing the movie characters during the three-day festival. Additional actors will be Paul Wenderlich as Mr. Martini, Kevin Schoonover as George, Mariah Ernhout-Fegley as Mary, Seth Kennedy as Mr. Potter and Maria Coleman as Violet.