Seneca County has questions, but Geneva doesn’t have all the answers just yet.

A resolution was passed at last Tuesday’s Board of Supervisors meeting, green-lighting a SEQRA response from Seneca County.

The resolution authorizes County Manager John Sheppard to respond to a July 27 request for response to SEQRA efforts, as Geneva moves forward through the process of adding a 100 slip marina near the Ramada.

Geneva City Manager Matt Horn tells FingerLakes1.com that the ‘only absolute’ right now is that there will be an expansion of dockage opportunities at the park. He noted that as part of the design contract, the City has a deliverable for economic feasibility. 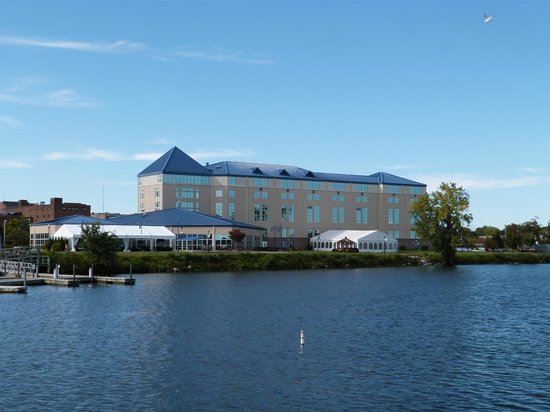 Horn described the venture as a “non-commercial” marina, which at the time meant no retail opportunities. By his definition, as well as the City’s that meant no ship store, fuel, or other saleable goods at the marina.

The supervisors in Seneca County are looking for more certainty moving forward. Some of the supervisors at Tuesday’s meeting even asked if the board should slow down on the SEQRA response process, until there’s more clarity on what will be taking place at the site.

The concern among the board is potential lost sales tax revenue from the expansion.

The lakefront property along Seneca Lake in Geneva is geographically unique. According to County Manager Sheppard’s research New York City is the only other municipality that has multiple municipal boundaries cross over each other.

This isn’t the first project to raise concerns in Seneca County, as the previously-debated development in front of Seneca Lake State Park — along State Route 5&20 drew criticism from Geneva residents, and concerned Seneca County residents — who recognized the boundary dilemma.

“Our consultants are evaluating whether something like electricity or water should or could be provided and/or charged for, as well as any fee structure for the dockage itself,” Horn explained. “In the end, we’re not looking to this as a revenue generator, but it may make sense for some funding to be produced to offset any operations or maintenance costs at the site itself.”

Sheppard didn’t anticipate any issues moving through the SEQRA process, but remained concerned about potential complications.

“The municipal boundary of Seneca County is the ‘high water mark’ of the west shore of Seneca Lake in proximity of the City of Geneva,” he explained. “Complicated, yes; the high water mark was once west of the Ramada Inn.”

Sheppard added, “My obligation is to act in the interests of Seneca County and make recommendations to the Board of Supervisors for the same. I anticipate no conflict; this marina enhancement will likely be beneficial to all parties involved,” he continued.

Horn shared similar sentiments regarding the docking opportunities along the northern shores of Seneca Lake. “I firmly believe that transient boaters are a huge untapped market for the north end of the lake,” he explained. “If we provide a safe, accessible space for these folks to dock for an afternoon, or even overnight, it opens up a whole new market to our retailers, restaurants, etc.”

Horn added, “These are folks who are already traveling the canal, but are passing us by for other communities with such facilities. Additionally, as we develop out this infrastructure, and our retail market continues to grow, those boaters who haven’t considered Seneca Lake as a destination on the canal, will take a look, giving us the opportunity to win them over as well.”

With Geneva leaving a lot on the table for potential development options along the northern shores of the lake — Seneca County and Geneva officials will have to iron out the taxable details.

If sales tax generating operations take place — now or down the road — along this controversial stretch of property — then the three involved municipalities will need to come together on an agreeable solution.

Either that or the entire boundary line will have to be re-evaluated, reconsidered, and re-drawn on local maps.