Physical details are in perfect order.

On July 1st the hotel will open it’s doors for to the public.

The hotel held a ‘soft opening’ for a limited number of guests on Wednesday. It highlighted the experience patrons will encounter when the doors open to the public on Saturday.

At first glance, the style of the hotel is the perfect blend of modern, elegance, and technology — and it allows for a guest experience like no other in the region. 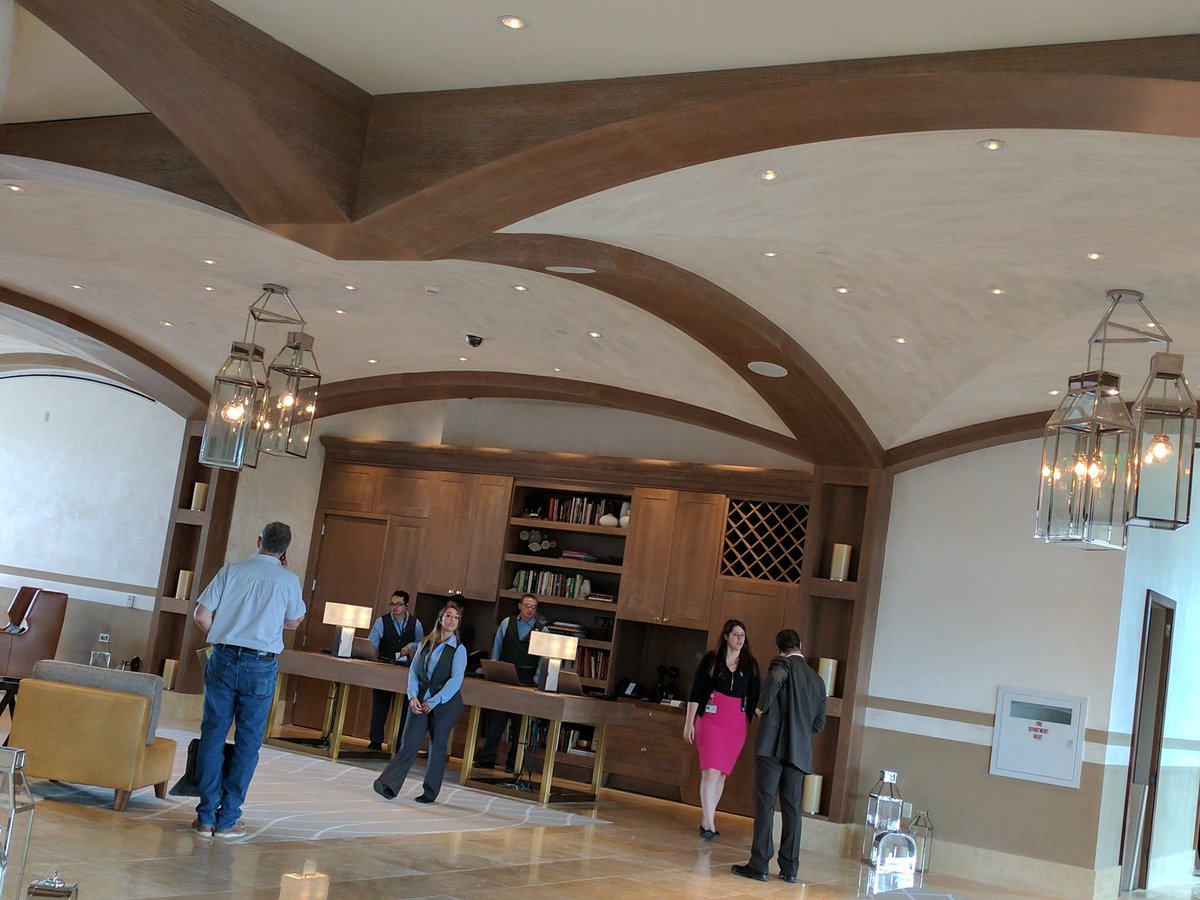 Unique is a good way of describing it, though.

The hotel has the features patrons would expect: a hair dryer, flat screen television, refrigerator, safe, and coffee maker. Those are the things people expect to see in any hotel room. But, one that could cost more than $350 per night — on any given occasion, absolutely must deliver on the expected amenities.

Decorative details not forgotten in hotel

The artwork above beds, as well as the design of furniture in the rooms is unique — and looks like the furthest thing from catalog order. Even the wooden housing for the flat screen television is unique — in that it encompasses the unit perfectly — blending it in with the wall flawlessly.

The lighting features throughout the spaces have a modern, minimalist design that feels premium. The operation is premium, too. As the patron walks through the space — lights that are off will turn on — on-command — as if a personal assistant is following you through the room.

Lighting around mirrors, customizable lighting around beds — which is ideal for couples who have different nighttime routines — and artificial candles, which flicker delicately in the background of the space. 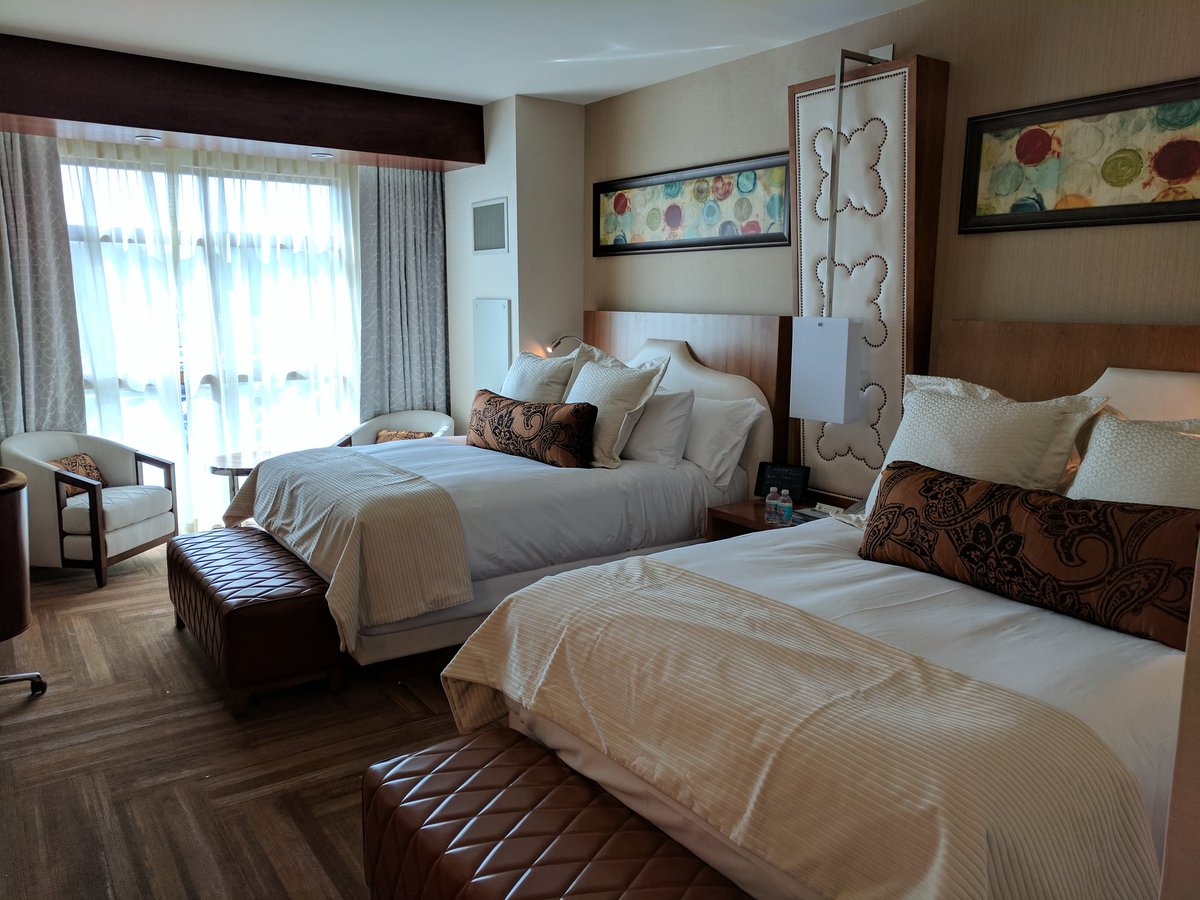 A perfect example: A linen closet in each room features a light, which without fail — only turns on when the person staying in the room opens the door.

It’s this kind of confidence that is easily overlooked, but will be deeply appreciated by patrons who stay at del Lago Resort & Casino.

Another appreciable furnishing note: Beneath the television where most hotels feature a dresser, desk, mini refrigerator — and a coffee table (sometimes a mobile one) — del Lago features a seamlessly uniform structure that houses all of those entities into one sleek design.

Again, it’s not something that every patron will take note of at first glance — but it’s something that when taking stock of the entire experience in terms of design — is impossible to overlook.

A feature the productivity buffs will appreciate — the office chair and desk setup. A minimalist lamp, as well as an embedded power strip — which features USB and traditional wall outlets — are both great. 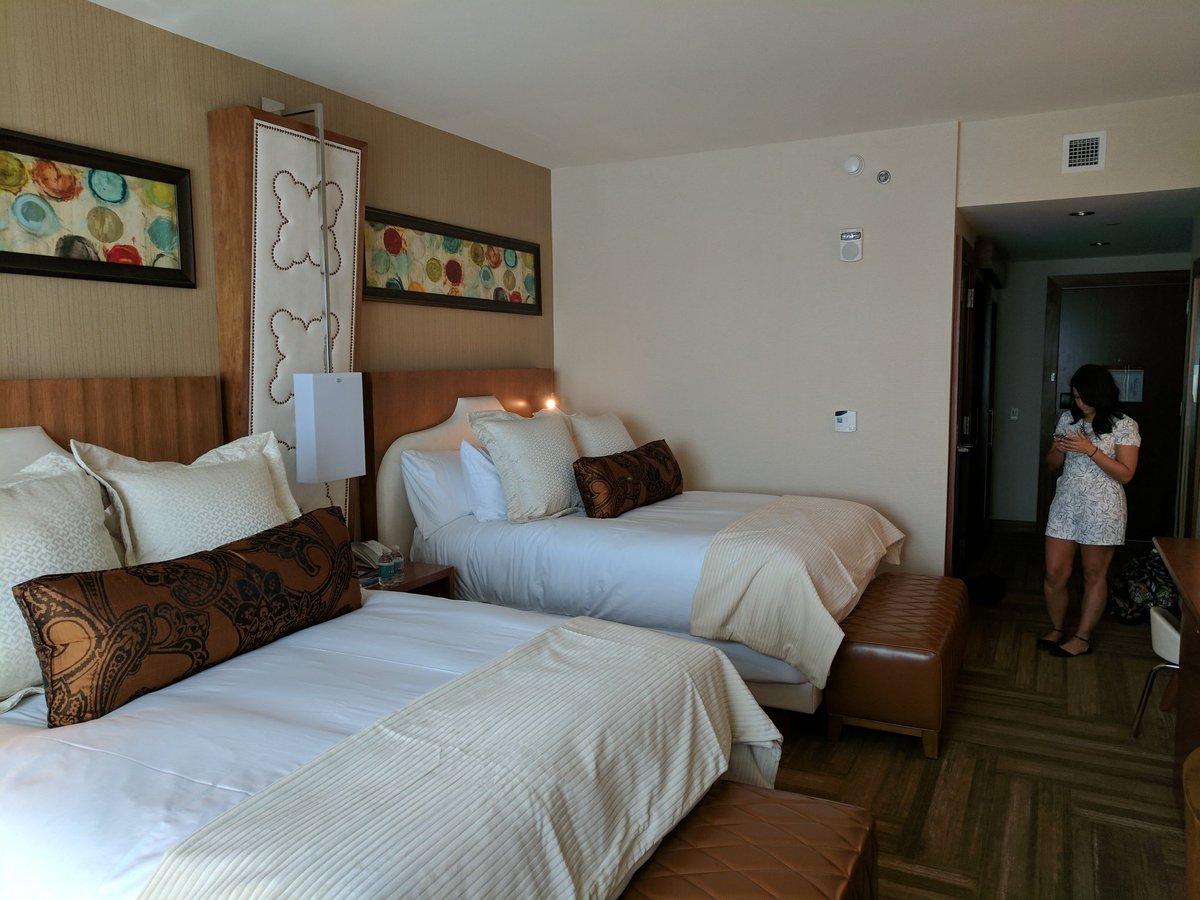 However, the quality and build of the desk chair featured inside the rooms is second-to-none. Trying to get work done? These spaces are ready to go.

While management hoped that they would be able to open by mid-summer — opening their doors on July 1st means they made it ahead of schedule — and did so without missing any of the important details.

Tech takes stress out of stay for guests

Need a bite to eat? How about an extra towel or blanket?

There’s an app for that.

No really — del Lago Resort & Casino is the first in the region to utilize a iPad hotel directory system. Guests can order food, housekeeping, or practically anything else they desire — from an iPad placed next the beds.

It replaces the traditional alarm clock — but don’t worry — the iPad system features an easy-to-use alarm clock that even allow for multiple alarms to be set — just like your smartphone or tablet at home. 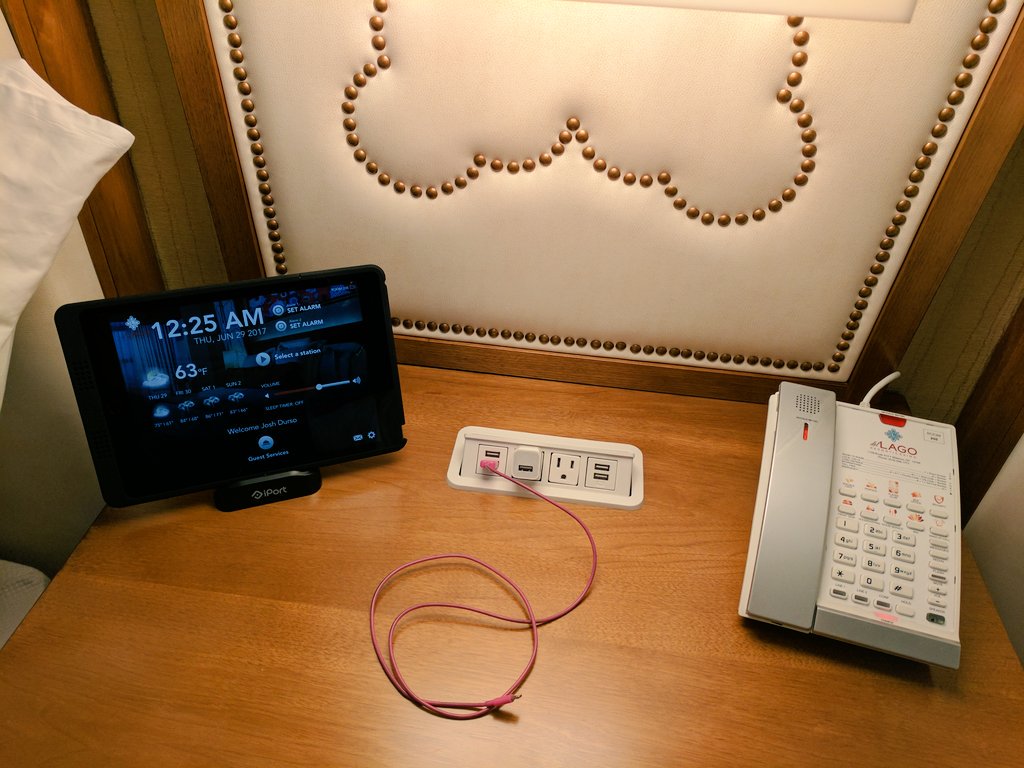 If that doesn’t impress you — the technology in temperature control is also unique.

Instead of a system, like many other hotels feature — where users choose ‘heating’ or ‘cooling’ – the system inside del Lago’s rooms toggle between heating and cooling depending on what temperature the user chooses.

Simply choose a temperature — and the system will take care of the rest — whether it means warming up or cooling off the room.

The television also features some unique features. Patrons get the usual cable television — in true HD, by the way — plus they get a resort directory, which scrolls upcoming events taking place at the casino.

The television also features a local weather app, which shows a several day forecast — as well as ‘live’ radar.

As noted, the smart and sleek implementation of the technology in the space is almost as beneficial to the user as the actual function of it. 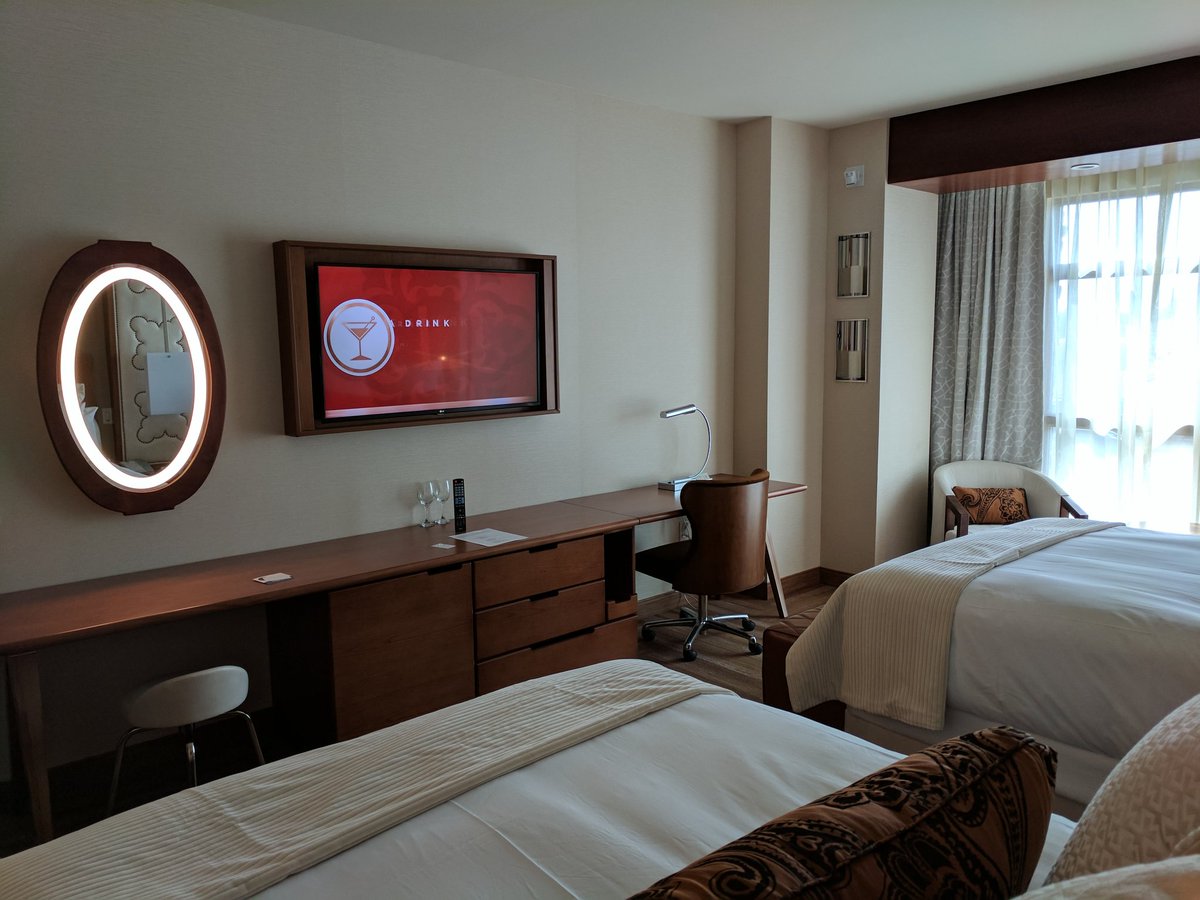 Those power strips, which feature USB and traditional wall outlets — fold down into all of the custom build desks and nightstands in the rooms.

Great for while they’re being used — but a smartly thought out feature for guests who might not be using the outlets at every moment.

The built-in nature of the outlets also ensures that users aren’t reaching under desks or tables to plug in their devices. It can easily be done right on the desktop — without any extensions or extra cables.

The bathrooms feature the same seamlessness that is showcased throughout the rooms. One continuous floor, throughout the stand up shower, and into the rest of the space — as well as a unique ‘sliding’ wood and glass door feature that is unlike anything seen in ‘traditional’ hotels. 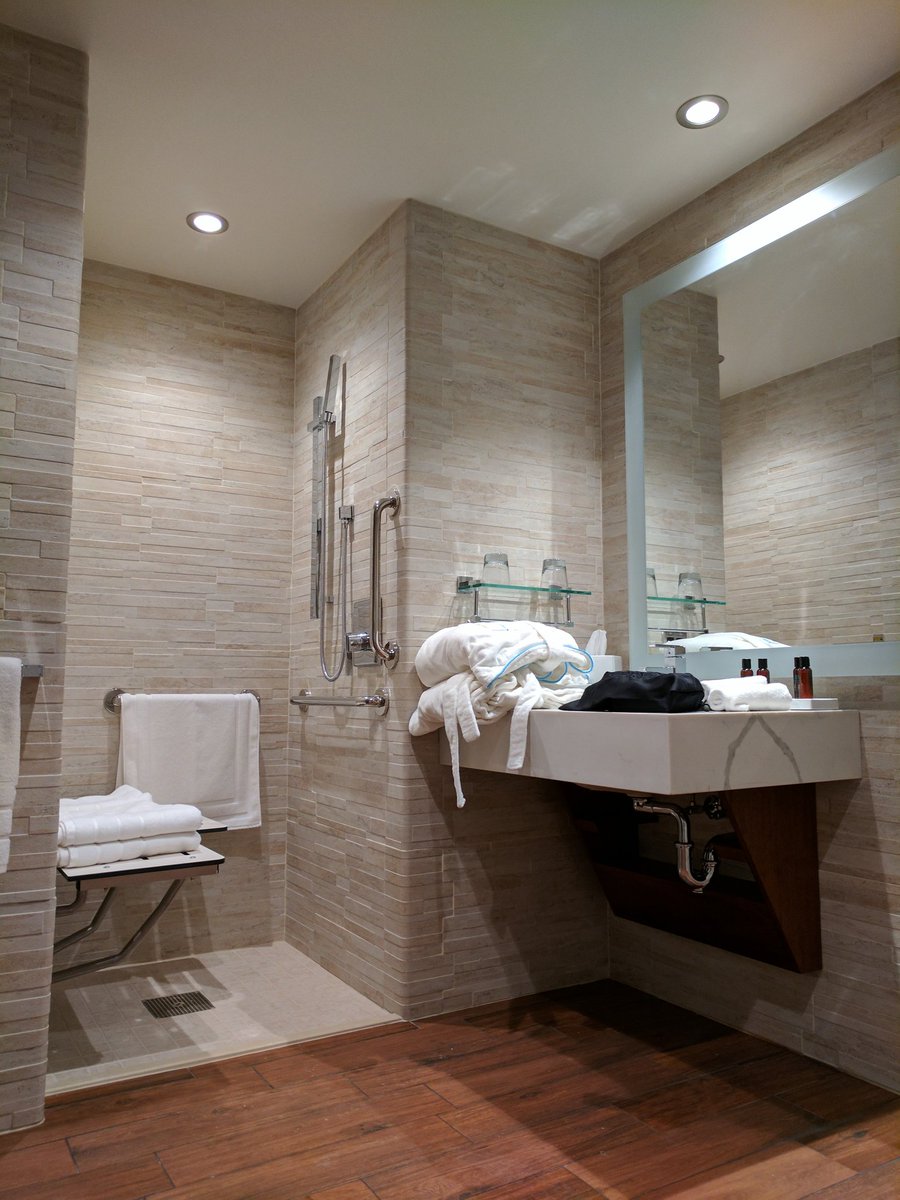 There are also bath robes and linens, which are made by the same company that produced the bedding. An Italian company called Frette was used, and the dense, heavy nature of these linens makes for another example of ‘premium experience’.

The bathrooms even feature weight scales, which have a digital readout — for those who might have hit the spa earlier in the day.

While the staff is still working out the final details of some rooms — the spa and Sociale Cafe & Bar were much closer to launch.

Patrons could be seen carrying around coffee cups from the cafe and bar, which will feature a healthier menu than the other dining options at del Lago currently. 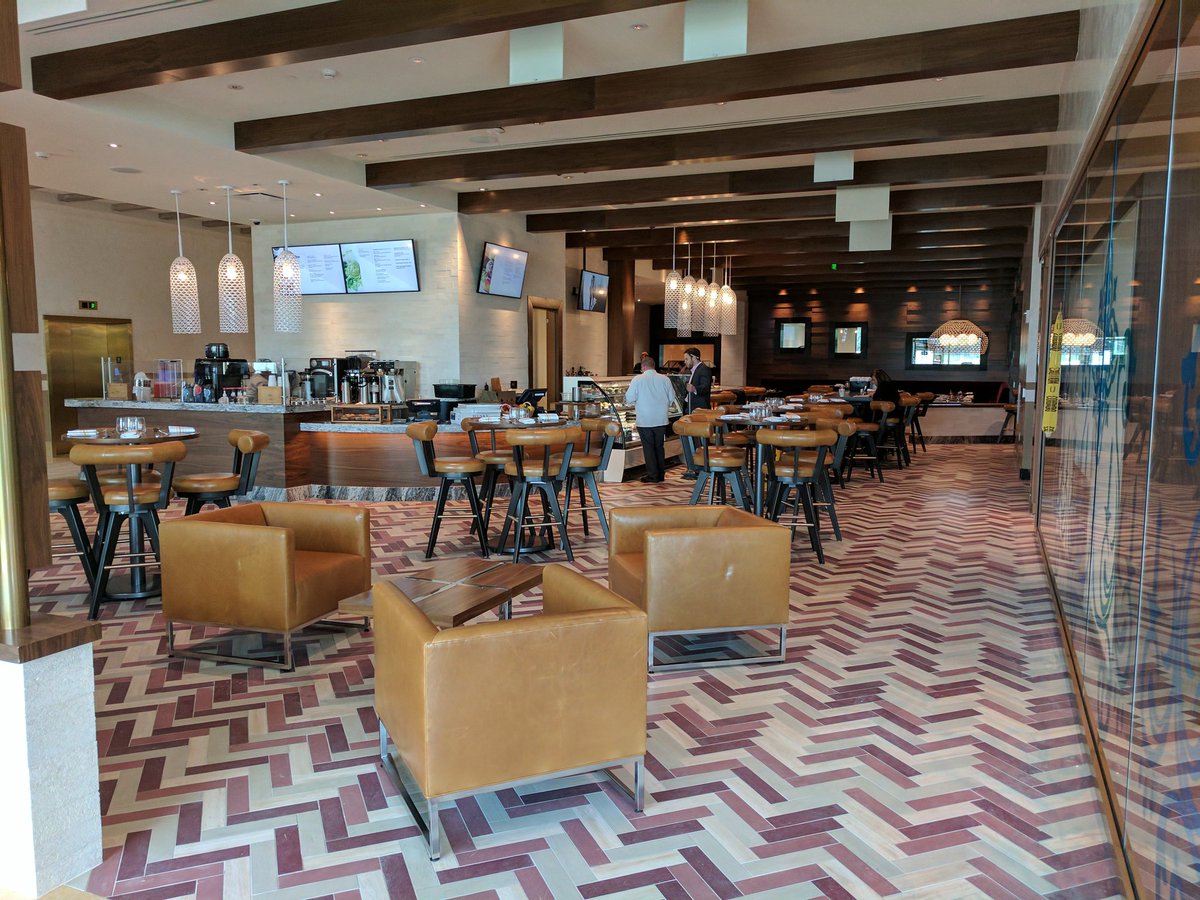 Management notes that roughly 200 employees were hired throughout the hotel and spa. While there were still a few open positions — a vast majority had been filled long before the soft opening on Wednesday.

Employees throughout the facility were busy, as staff worked out the kinks — learning more about the building and space by the moment — as they catered tirelessly to every guests needs.

del Lago’s hotel by the numbers

There are also 30 suites, which can be expanded to 1,400 square feet if necessary — to feature two bedrooms and 2.5 bathrooms.

There will be 11 rooms at the hotel featuring balconies. 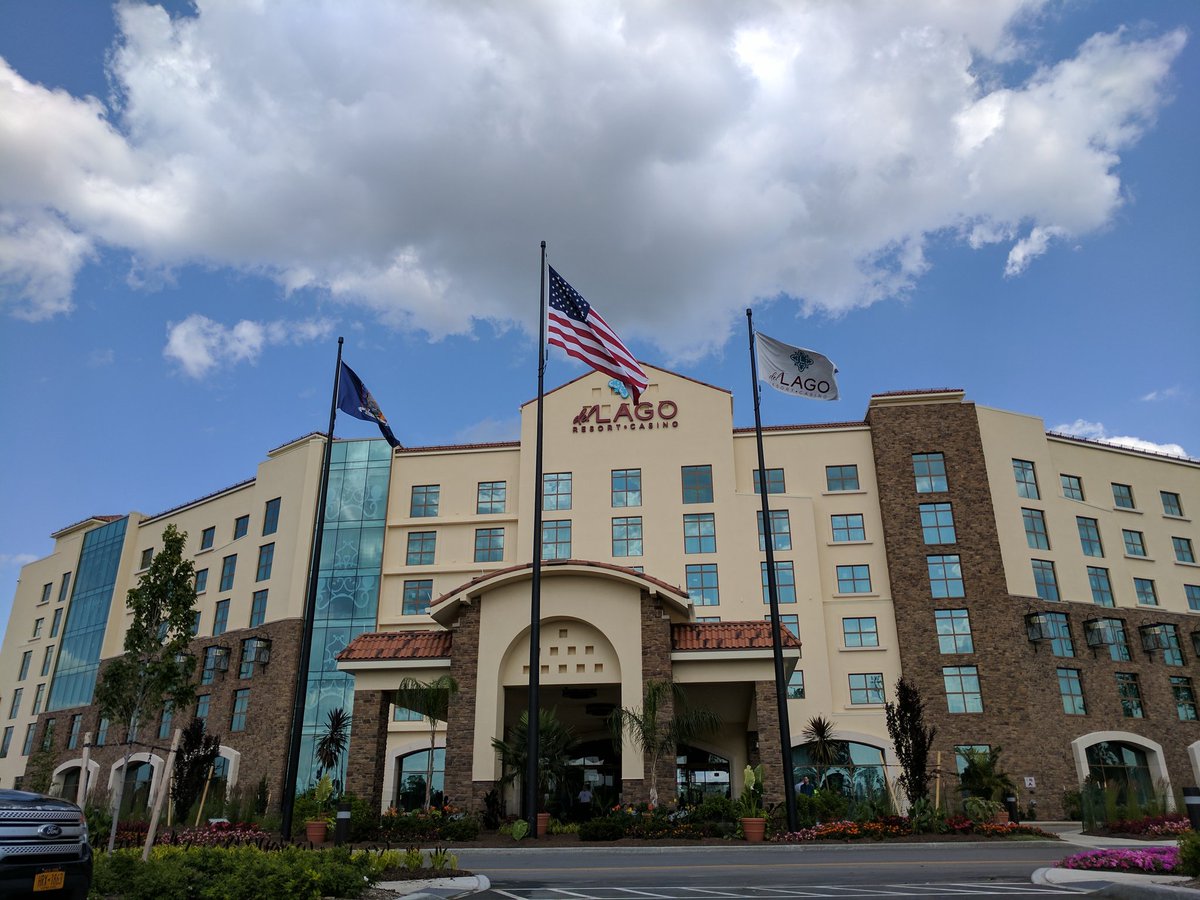 The hotel will also feature a 24-hour fitness center, as well as 24-hour room service with additional dining options. A business center will also exist within the hotel space, as well as the addition of wellness classes to coincide with the spa and Sociale Cafe & Bar.

Guests will have a lot to soak in on July 1st, but patrons will get a truly unique experience visiting del Lago Resort & Casino’s brand new hotel.

With rooms ranging in cost — the experience is definitely more than your run of the mill hotel. While spending $200, $300 or even $400 per night might be out of some people’s budget and comfort zone — the hotel — even in the most-basic rooms is geared toward special occasions.

It can accommodate any background, particularly the professional looking for a quiet space to get work done while on a business trip — beyond the glitz and glamour of the casino floor.

Furthermore, it is another item that puts Tyre, New York on the map. Not just for being conveniently located next to the Thruway — or being the “Gateway to the Finger Lakes,” but because it delivers something truly unique — something that will not ever be easily duplicated — even as economic development continues in the community.