Several parent taxpayers spoke at the meeting Thursday night, June 22nd questioning the perceived urgency to approve a new 5-year contract with Calvin when a year still remains in his current contract. Parents criticized the district for discussing a contract extension when Calvin’s goals for the district have yet to be realized.

“I think the board should hold off on a contract extension,” said resident Kim Phillips. “I would like to see how things play out. There’s no downside to waiting another year.” 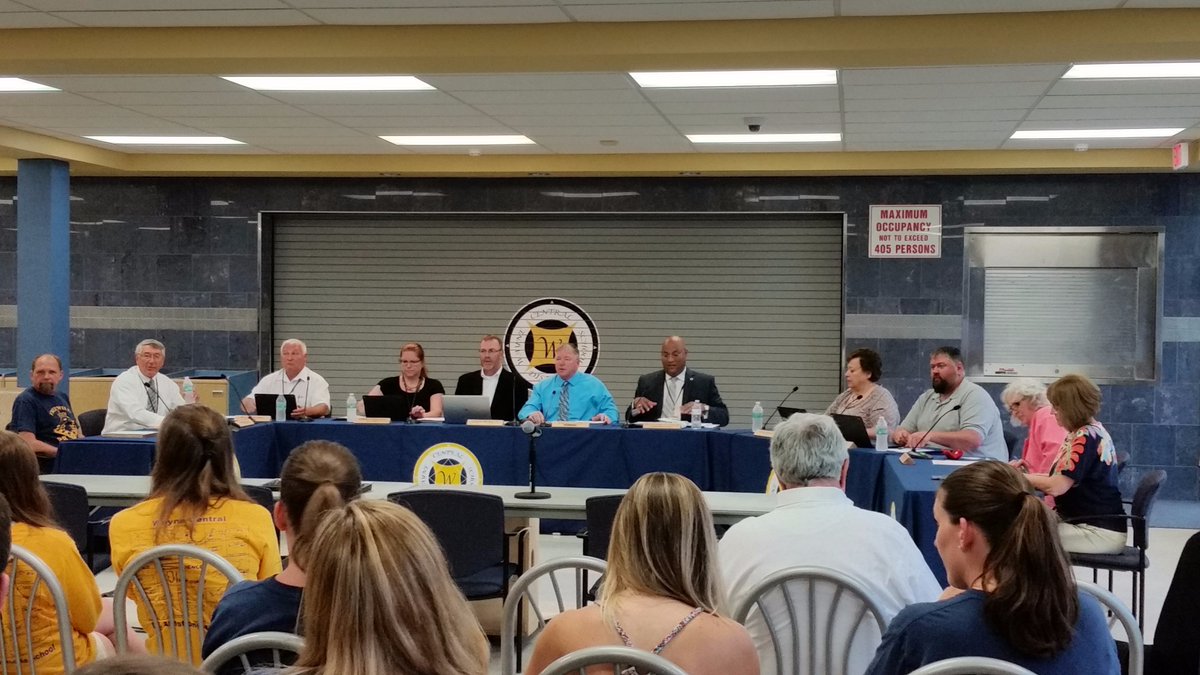 Calvin’s plan, approved by the board, included the closing of one school and renovations at the other schools to accommodate the ultimate goal of becoming a single campus. The plan was fully researched along with multiple other options and determined to be in the best interest of the district and its students. Some 60 efficiencies were noted that the district is working to implement in the plan as well.

Parents expressed concerns regarding the cuts being made to programs and staff while their school taxes go up, and also their sadness at the closing of Freewill. The day of the meeting marked the final day of classes at the elementary school and many parents at the meeting wore Freewill T-shirts as a reminder of the school’s contested closing by many.

Parents also criticized the speed at which changes are taking place as the district works toward a single campus.

“I want (the contract extension) postponed,” said Cindy Scheltz, a parent whose children attended Freewill. “Things are rolling far too fast. There isn’t any need to rush it this year.”

Resident Ruth Mann noted Wayne Central’s superintendent is the third highest paid in the area, the new contract bringing it to over $173,000. Palmyra-Macedon’s superintendent is paid more, but Mann said Robert Ike has been in his position for 10 years now.

School Board Member Ron Miller argued that the district is ranked among the top 25 high schools in the 86-school region, sharing that honor with only one other local school, Marion. He also noted that Wayne Central also made the top 100 high schools in Upstate New York against 431 other school districts. Business First also ranked Wayne Central at 143 out of 431 for spending the least on a per pupil basis and 89 our 431 for school districts reaching their goals in Upstate New York. The numbers come from data from the 2015-16 school year from districts across the region and Upstate.

Although those numbers show evidence of strong district leadership in the years leading up to the studies mentioned, Miller attributed these numbers to Calvin, who has been with the district for only two years – not enough time to make a definitive difference in district performance, parents argued in turn after the meeting.

School Board President Tim Reynolds the board looked at other districts closely when it came to determining pay for the superintendent’s salary and recognized Calvin for meeting nine goals in the district’s strategic plan in just one year.

“No one comes into a school district to cut jobs and close schools,” he added.

School Board Member Carla Boerman said they sought a lot of input from the public and a look at the whole study will help taxpayers better understand the decision the board made. She commended Calvin for putting together a budget that addresses the possibility of Ginna Nuclear Power Plant closing so the district will be financially stable should that come to fruition.

“He’s looked at everything and did it with the least amount of angst,” Boerman said, adding that the fact Calvin is seeking to extend his contract is a good thing. “People were concerned he was going to come in, close a school and leave.”

A call to Calvin after the meeting was returned by Public Information Specialist Amy Gebhardt, who noted the superintendent was extremely busy with end of the year duties. Gebhardt said Calvin’s contract is typical and seeking to renew that contract the year before the old contract expires is customary.

“We’re really looking to the future and things coming together,” Gebhardt said.

Gebhardt declined in Calvin’s stead to comment on the board’s approval of the contract.

It is the district’s goal to have all work at the schools complete by the start of the school year.

Details of the district’s comprehensive study and plan are available on their website at www.wayne.k12.ny.us.