Continuing their matchups against AL East opponents, the Yankees headed back home to take on the Boston Red Sox. After a underwhelming start, the World Series favorites are starting to play a lot better baseball, currently 2nd in the division. The Yankees came in just 2.0 games up, so this series was very important for some separation. 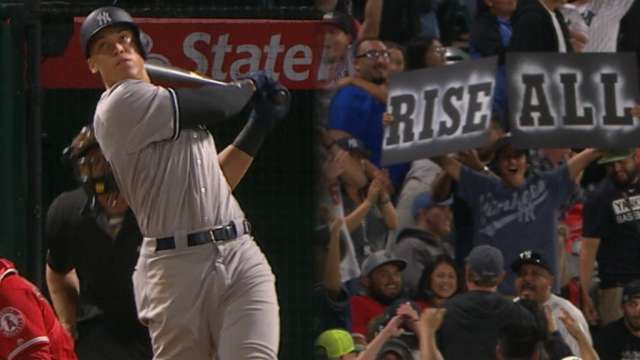 Cooling off the Red Sox

The team would fall short in the opener, as Masahiro Tanaka’s struggles continued. He gave up 3 home runs in the first five innings to put the team in a rather difficult spot. The “Yankees’ ace” currently has an ERA north of 6 and a WHIP of 1.50. In a season where many things have gone right, he has been nothing but a huge question for the team. The offense still did what it could, as Chris Carter hit his 5th longball of the season. But, facing off against Craig Kimbrel was too much and the Yankees just fell short 5-4.

Luckily for the Yankees, the rest of the week after that was a lot easier. Red Sox starting pitching continued to disappoint, as defending Cy Young, Rick Porcello, gave up 6 runs most notably, a three run shot off the bat of Chris Carter to give the Bombers a 5-0 lead. The bottom 4 hitters in the lineup combined for 8 hits and 6 RBIs. Not to mention, C.C. Sabathia was outstanding in this one, going for 8 scoreless innings for the first time since 2012. The Yankees were winners by a score of 8-0.

The rubber match featured a pitching matchup that included David Price. If you know anything about David Price, he is simply not good against the Yankees totaling a 4.69 ERA over 37 games against the ballclub. Things were no different at all here. Gary Sanchez is starting to break out this season, as he would hit a 3-run shot in the third to give the Yankees a 4-0 lead. But that’s not all, another home run in the fifth capped off a 5 RBI day. Brett Gardner and Starlin Castro also contributed, getting 2 RBIs each. With Michael Pineda shutting down the Red Sox offense, the Yankees were victorious, 9-1.

The Baltimore Orioles came into town for a three game series. While the O’s are still currently fighting for potential contention, they have struggled mightily on the road this year with a 10-20 record (as of June 12th). This was a perfect opportunity for the Yankees to keep their success going.

Dylan Bundy and Jordan Montgomery squared off for the opener of the series and they were both pretty solid. Montgomery finished the day with 8 strikeouts over 7 innings. He looked very sharp again, giving up just 2 runs on a homer from Jonathan Schoop in the second. Bundy was cruising for the most part as well, but a home run from Aaron Hicks in the sixth made him eligible for the loss. Unfortunately for Bundy, his relievers did not give much help, as veteran right-hander, Edwin Jackson let up another home run to Aaron Hicks as well as a double to Matt Holliday. The Yankees would soon win this one by a score of 8-2. Austin Romine also had 2 RBIs and Gary Sanchez collected 2 hits and 2 runs scored.

Starting pitcher, Chris Tillman had a day he would rather forget in game #2. It all started with a 121 mph homerun off the bat of Aaron Judge, the fastest hit of the statcast era. A 2-run single from Gary Sanchez extended the lead to 3-0. Didi Gregorius kept things going with a two-run shot, the score was 5-0. Two batters later, Chris Carter hit an RBI single to make the game 6-0. Now in the second inning, Starlin Castro made the game 9-0 with a three run shot over the left field wall. Tillman finished the day with 7 hits, 3 walks, and 9 runs given up over 1 ⅓ innings pitched. His ERA is now 8.01. That wasn’t all for the Yankees, as they still scored 7 more runs, notably on dingers from Matt Holliday and Gary Sanchez. The Yankees scored 16 runs and had 18 hits in this one, both season highs. Yankees’ starter, Luis Severino was amazing as well, giving up just 2 hits and 1 run through 7.0 innings. The final score was 16-3.

After that blow out, Kevin Gausman took the mound for the O’s. Immediately Gausman would load the bases. This gave way to a single off the bat of Starlin Castro; the score was 2-0. That wasn’t all, as right after Gary Sanchez cleared the bases with a 3 run shot, making the game 5-0. The Orioles attempted to come back, as the Yankees rolled with their bullpen to give Masahiro Tanaka an extra day of rest. The score was 5-3. However, there was no shot of a Yankees loss, as Aaron Judge proved that he is not human with a 495 ft bomb that went over the bleachers in left. A Starlin Castro 2 run shot extended the lead to 10-3. Later in the 7th, another home run from Aaron Judge added some icing to the cake, his 21st of the year. The offense has scored 10 or more runs for the second game in a row. The Yankees win their fifth straight, 14-3.

The Bombers will head out west for a road trip against the Los Angeles Angels of Anaheim and the Oakland Athletics.