Syracuse picked up a huge road victory to record their 18th win of the season defeating the Miami Hurricanes 62-55 on Saturday afternoon. The Orange were led by an 18 point, 6 assist effort from Frank Howard and a 16 point, 11 rebound outing from Oshae Brissett. Tyus Battle scored 13 including a huge late game three pointer and Marek Dolezaj added 11 points.

Syracuse faces Miami on Saturday, Feb. 17 at 12 p.m. in the Watsco Center. The Orange trail the Hurricanes by one game in the ACC standings and have the opportunity to pick up an important road victory. The game will be televised on CBS. Fans can also listen to the live broadcast on the Syracuse IMG Radio Network. Syracuse dropped to 17-9 overall and 6-7 in league play after a 74-70 loss to NC State on Wednesday night and desperately need to win today to keep their NCAA Tournament hopes alive.

Syracuse holds a 17-8 advantage in the all-time series over Miami. The Hurricanes won the most recent meeting, 62-57, in the ACC Tournament last season. Read More 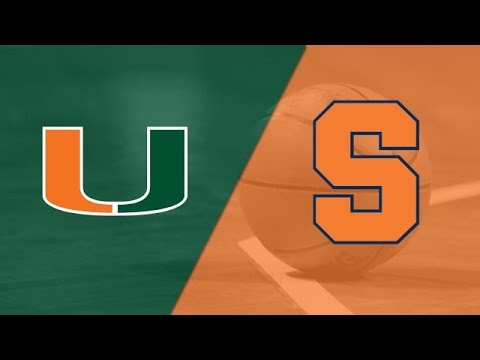