Cayuga Lake is no stranger to Fishing Tournaments, all year long if you look out onto the lake chances are you will see someone out there fishing. The Finger Lakes region has become known for world class fishing at its finest. However, on the 23rd and 24th of September Cayuga Lake will become home to a Fishing Tournament unlike any it has ever seen. The morning of the 23rd will mark the first day of the New York State KAYAK FISHING Championships from the statewide tournament series NYKBF. NYKBF, which stands for New York Kayak Bass Fishing, was started two years ago, and is ran by two local Anglers: Justin Hausner of Fuzzy Guppies and John Petro. These two anglers have invited other NYKBF chapters from the Capital Region as well as Long Island to compete in this two day grudge match.

This two day tournament, and every tournament in NYKBF for that matter, is all done by “CPR format” (Catch, Photo, and release) and measured on a unified measuring board. Photos are then uploaded to a tournament page located on www.tourneyX.com and anglers are ranked by the total length of all three of their largest fish over the course of the day. Fish are then judged by standard rules by the tournament directors and then prizes are rewarded!

The State Championships will also have with a great local presence, local campground Waterloo Harbor is going to be the host location along with kayak shack Fuzzy Guppies, offering half price camping to all competitors. There will also be entertainment open to the public all afternoon on Saturday at their facility. The local Lighthouse BBQ food truck will be cooking up amazing food from 3-7 pm, live music and beer and wine will be available to purchase as well for everyone of age. NYKBF is very excited to work with multiple local tourism agencies as well as local companies to make sure that everyone traveling to the Finger Lakes understands just how warm and inviting this area is… as well as just how good the fishing is in the state of New York.

NYKBF does live tournaments as well as month long ONLINE tournaments throughout the summer season, and markets their series as one for EVERYONE. They pride themselves on being a great outlet for people to meet like minded people that just love to be outside and fishing. NYKBF is a great resource to learn new techniques and fish new areas throughout the whole state of New York.

Both tournament directors are from the Finger Lakes Region as well, Justin Hausner is part owner of Fuzzy Guppies in Waterloo, a member of the Jackson Kayak national Kayak Fishing team as well as other national sponsors, leads guides throughout the Finger Lakes Region and is a certified kayak instructor with the American Canoe Association. John Petro, a student at the New York Chiropractic College, is a member of the Wilderness Systems Kayak Fishing team, as well as many other national sponsors as well. Both of these guys are leading the way for kayak fishing in the state of New York through NYKBF as well social media.

Keep your eyes on the lake during the weekend of the 23rd, you won’t believe some of these set ups! 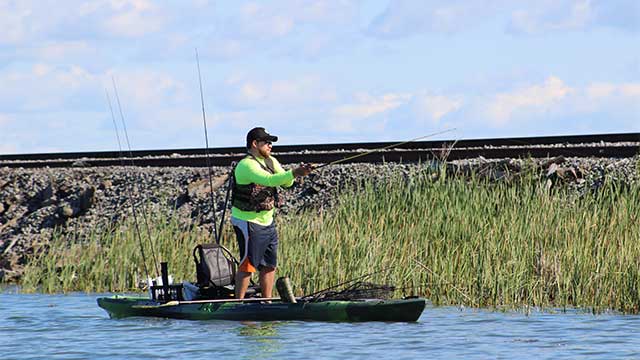 For more information about the tournament series stop by Fuzzy Guppies and chat with Justin Hausner, or go over to www.nykbf.com to check out all upcoming events and check out the trail.