A weekend job in the tasting room of Three Brothers Wineries and Estates led Justin Paolicelli ’07 down an unexpected career path. Today, he’s the winemaker at the Seneca Lake business, which features three wineries and a microbrewery on its estate.

Paolicelli graduated from ESF with a focus in plant pathology and physiology. His then-girlfriend/now wife, Erica, was working at Three Brothers Winery to earn money for graduate school. On weekends, Paolicelli helped out in the tasting room. During those shifts, he would talk to owner Dave Mansfield about the vineyards.

“I would point out diseases and what was being done incorrectly and what could be done better and ways to improve the vineyard, and eventually he offered me the job (of vineyard manager),” Paolicelli said.

Paolicelli worked in that capacity for two years, drawing on his ESF education to bring renewed vitality to the 30-plus-year-old vineyard. 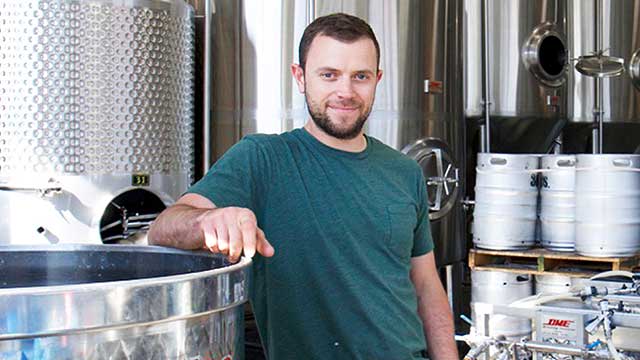 When the winemaker left in 2010, Mansfield offered the job to Paolicelli. Having grown up 20 miles west in Seneca Falls, Paolicelli felt he had the right background for winemaking. “Growing up in the Finger Lakes, you have the palate for wine, and wine making is 50 percent science and 50 percent art. I felt like I maybe had the art part down.” For the other 50 percent, he drew on his organic chemistry classes.