Clinging to a one-stroke lead, Colligan drained a 30-foot putt for eagle on the final hole to clinch his second straight and third overall Section crown against Savage, of Timber Banks, who finished with a birdie on 18. 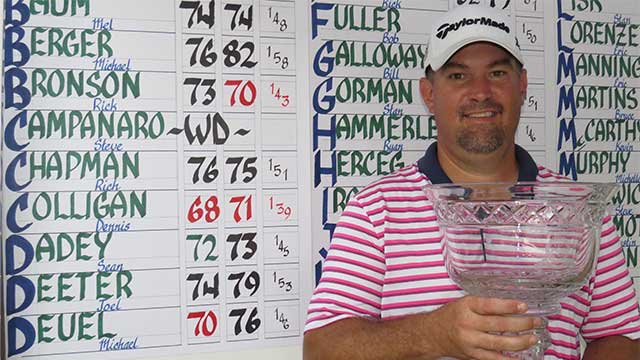 “I knew if I could at least get it close then Kevin would have to make his for the tie,” Colligan said. “Fortunately I had the right speed and the right line and put it in the cup.”

Colligan, the first round leader, carded a 1-under-par 71 in the final round following a 4-under 68 in the first round. He finished the tournament at 5-under 139 to earn $3,500 for first. This is Colligan’s second major of the year as he won the Golf Max/Golf Pride Central New York Open in May.

“We have four majors and try to attempt to prepare for those four are my goal throughout the summer,” said Colligan, who is celebrating his 20th season at Cazenovia GC. “With work and lessons and wife and kids, it’s hard. But thanks to them, I can get out and play on Sundays. Also to my members who are very supportive.”

Savage pulled even with Colligan at the turn then took a one-stroke lead with a birdie on 10. But an unpredictable wind over the final six holes created problems for both golfers. Colligan took the lead for good on No. 15 by making par after Savage double-bogeyed the hole.

“The wind went every direction,” Savage said. “It never stayed in the same direction. I started hitting some poor shots and paid the price.”

“As we got to the back nine the wind started blowing pretty good out here and it made it harder,” said Colligan, who won in 2016 at Seven Oaks and 2010 at Shenendoah. “I had to grind it out, it was a battle.”

Although Savage came up short in the battle of former champions, he earned a berth in the 2018 PGA Professional Championship June 17-20th at Bayonet Black Horse in Seaside California. Savage, four time Section Champ(’95, ’04, ’14 & ’15) earned $2,725 with his runner-up finish.

Besides Colligan and Savage, Cazenovia Country Club’s Mark Tucker (2-under 142) and Rick Bronson (1-under 143) also advanced to the 51st annual national championship.