Protesters wanting to see a “Dump-free Community” were outside the Seneca Falls Town Hall again just prior to the town board meeting Tuesday night, June 6th.

Tempers flared as several of those residents also sought to make their voices heard at the meeting, taking the allotted 3 minutes each to speak about their desire to see the Seneca Meadows landfill close. 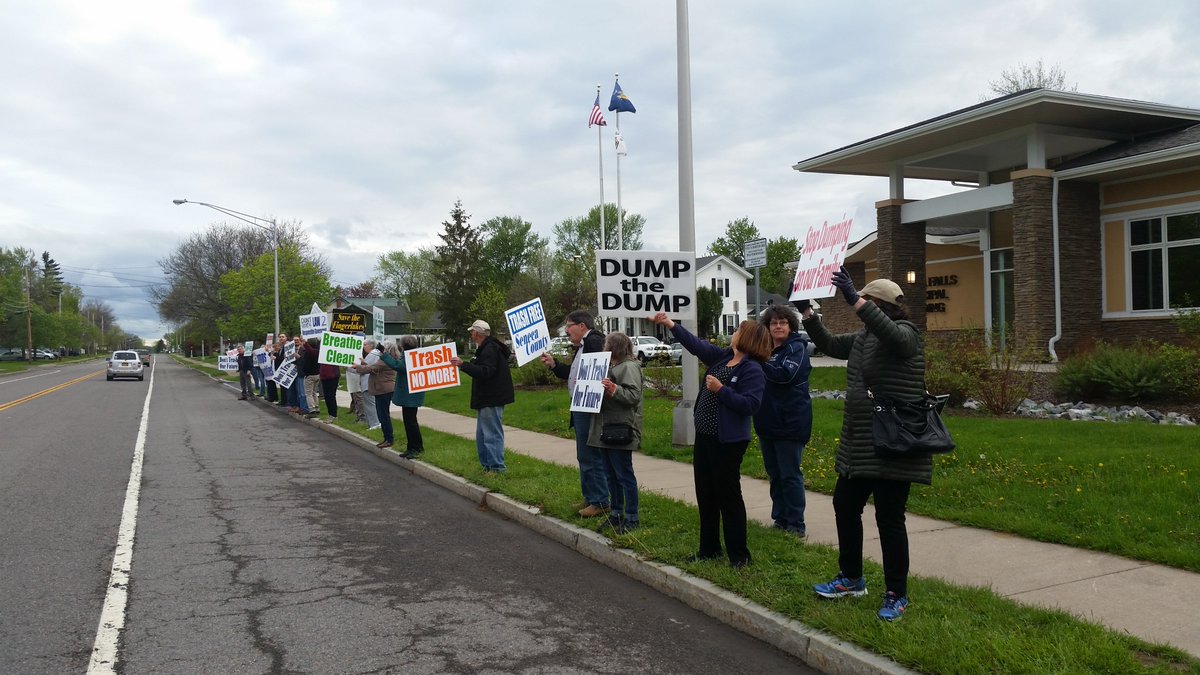 “Our health should not be compromised for money,” said Valerie Sandlas, who warned of the many health risks the landfill pollutants pose to community members and landfill employees as noted in multiple studies done by experts.

Joseph DiCicco agreed. He told the board he believes the future of the town as a tourist destination and healthy place to live is in jeopardy, emphasizing the need for a definite closure date for the landfill. DiCicco also said he doesn’t believe the Canada-based company cares about the local community.

“The landfill money is not a gift,” said resident Jim Sandlas, noting that Seneca Falls budgets are 10 to 20 percent higher than other communities of comparable population across the state. “It’s the worst deal in the history of business.”

He also asked Town Supervisor Greg Lazarro to return his anti-landfill sign, which was removed from his personal property by town employees. He cited an email from Lazarro calling for the removal of signs from town property, but the supervisor denied knowledge of the email. Lazarro said it was decided, however, that all signs should be removed from all town property.

“They are things that are possible, but not probable,” he said.

In light of the many state agencies that regulate and monitor activities at the landfill, he said it’s unlikely they are all corrupt and out to hurt residents. McGill went on to call what happens to garbage in a landfill is the same as organic material in the woods – something called decomposition.

Doug Avery, president of the Seneca Falls Environmental Action Committee, questioned the need for continued talks for a new host community agreement between the town and Seneca Meadows. Assumptions have been that the landfill company wanted to push back the landfill’s 2025 closure date.

“In various conversations with Kyle Black (Seneca Meadows district manager), he has repeatedly danced around the issue of closure in 2025,” Avery said at the meeting. “His evasiveness has been both confusing and frustrating, and has added fuel to the assumption that the landfill was pushing for more time.”

Avery speculated that Seneca Meadows may be looking to double the amount of garbage being brought into the landfill. He noted that the landfill’s mother company, Waste Connections, owns a landfill in California where a new agreement is being proposed that would double the intake to 12,000 tons per day. He questioned whether this is the new corporate strategy across the U.S.

“Imagine 24 million pounds of garbage each day,” he said. “Imagine twice the truck traffic. Imagine the mountains of garbage growing at twice the rate. If they had to lower intake in order to help get the smell under control, imagine what will happen to the stink if they double it.”

Avery admits he could be wrong, but he said in light of the fact that little to no information is coming from Seneca Meadows or the town, residents have no other choice but to speculate.

Black was at the meeting to provide an update to the board on new developments at the landfill. Over the past year, the company has invested $7.5 million in odor control technology and Seneca Meadows is reporting a 30 percent increase in landfill gas collection system efficiency. Seneca Meadows has installed over 25 acres of final cap, 12 acres of temporary cap, 50 vertical gas extraction wells, 21 horizontal gas collectors and 43 gas extraction pocket wells, and over 5,000 feet of header pipe that conveys the gas to the natural gas and electricity plants in the past 12 months – all to address the odor issue.

Black said the town and Seneca Meadows entered into negotiations for a new host agreement last year when a local law was proposed that would have made operating a landfill in the town illegal. Since that law has been rescinded, Black said there is no longer a need to discuss a new agreement.

A recent economic impact study assessed the total economic impact of the landfill to be $72 million annually in Seneca County. The study was conducted by an economics student at Cornell University as a result of an internship at Seneca Meadows. The study also showed that for every dollar in revenue generated at Seneca Meadows, $1.30 in economic activity is generated in the county.