Seneca Meadows, Inc. announced its wetlands preserve on Black Brook Rd. was featured in Land and Water Magazine, a national publication which services the erosion control and water management industry.

The success of the extensive wetlands mitigation project at the Seneca Meadows Wetlands Preserve, as well as a successful brook realignment project, were also featured in the magazine’s March/April issue.

The article was written by Jack Broughton of Applied Ecological Services (AES). AES is the ecological restoration firm that helped develop the original design of the Preserve, and now maintains the popular facility. 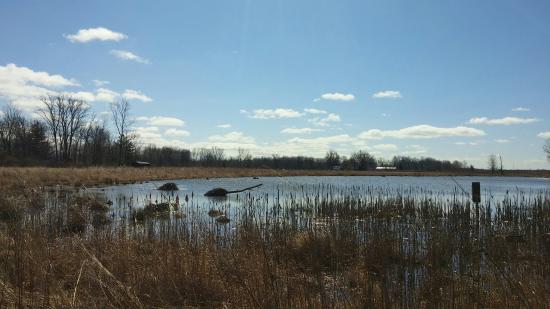 Broughton writes, “Because of the quality commitment of the Seneca Meadows Landfill owners to the community and the environment, the Seneca Meadows wetland and stream mitigation project that began in the early 2000s has become a national model of success in achieving synergistic benefits for Economy, Ecology and Culture.” The full article can be found at www.landandwater.com.

“We are honored to be featured in Land and Water Magazine,” said Marcy Neumire, program director for the Seneca Meadows Wetlands Preserve & Education Center.

She added, “It’s been wonderful to watch the development of our preserve and see successes such as our bird population exploding from around 70 species to over 200. We’re pleased that Land and Water felt that this project was ecologically significant enough to share.”

The Seneca Meadows Wetlands Preserve is protected in perpetuity by a conservation easement, and will be placed under the stewardship of Audubon New York to manage in perpetuity, using an endowment being established by the Landfill.

Seven miles of trails through native flowered grasslands, forested areas and along ponds are open to the public seven days a week from dawn to dusk.

In 2014, the Seneca Meadows Wetland Preserve was designated as an Important Bird Area by Audubon New York.

The Important Bird Area program is an international bird conservation initiative with the significant goal of identifying the most important places for birds and conserving them.