The night’s racing action began with the held over 30-lap 4 Cylinder feature event, which saw Casey Burch grad the early lead.  Ray Hyer had a flat left front which brought out the yellow on lap 3, as he pitted and returned to the track for the restart.  Hyer charged through the field grabbed the lead on a lap 10 restart.  It looked like Hyer was going to complete the back-to-front charge for the win…but on the last corner of the final lap, Hyer’s car broke and he coasted to a stop just short of the finish, allowing Baker to slip by and take the victory.

The 30-lap Modified main event saw Brady Fultz lead the first lap, with Tyler Siri grabbing the top spot one lap later as Alan Johnson and Matt Sheppard battled for third place.  Sheppard grabbed second on lap 6 and chased after Siri until a lap 10 caution for Eldon Payne’s slowing car.  Sheppard jumped into the lead on the restart as Johnson closed on Siri to battle for second.  Sheppard was able to pull away and handled traffic in the second half of the race as Johnson snagged second from Siri.  At the finish, Sheppard had his first Outlaw win of 2017, followed by Johnson, Siri, Steve Paine, and Joe Dgien. 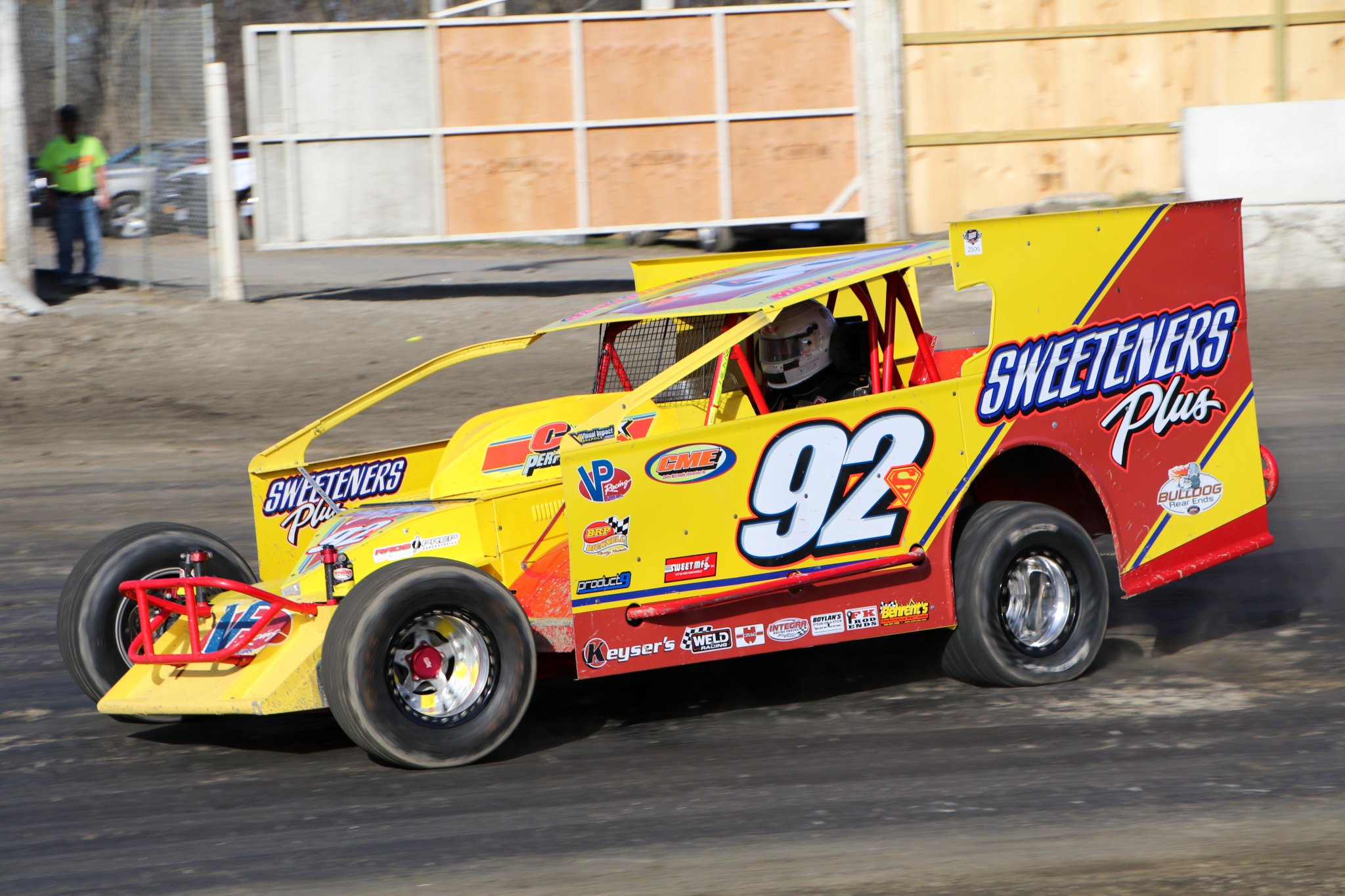 Brett Buono jumped into the top spot at the start of the 25-lap Crate Sportsman feature event, but spun trying to avoid the Hillary Ward car that was heading to the pits on lap 5.  That handed the lead to Brent Ayers for the restart, who battled Chris Fisher for the lead.  Buono, who was trying to make his way back through the field, made contact with another car and broke the front end on lap 11.  A number of restarts on lap 11 shortened the field and on one of the restarts, Ayers and Fisher made contact, sending Fisher spinning and flattening the right front on the Ayers car.  That gave Josh Keesey the lead which he held until his car hooked a rut, which damaged the front end and sent him to the infield.  That set up a two lap dash to the finish that saw Dale Welty, who had violently flipped in a Modified earlier in the night, outdrag Brian Fish to the fine for the win.

The Crate Late Model 20-lap feature began with TJ Downs taking the lead until Jason Knowles grabbed the lead on lap 2.  After a quick yellow for contact between Downs and JJ Mazur bunched the field for a lap 7 restart, Jason Knowles’ car faltered, handing the lead to Brian Knowles, who outran JJ Mazur to the finish to take the victory.

The Crate Late Model heat was won by Brian Knowles.

Jake Karlnoski took the lead at the start of the 20-lap IMCA Modified feature with Phil Yaw moving into the runnerup spot.  Yaw took the lead on lap 6 but the yellow flew for debris on the track one lap later, bunching the field.  Jake took the lead back from Yaw on lap 9 as his father, Rich, slipped into the runnerup spot at halfway.  The Karlnoskis battled for the lead until Jake nearly went off the track in turn 3 and coasted to a stop, handing the lead to Rich.  Karlnoski led till turn 3 of the final lap, when Shawn Bruce slid under him and snagged the win by a car length.

Last week’s Street Stock winner, Quinn Sutherland, jumped out in front of the 20-lap Street Stock feature with Chuck Winslow moving into second as the pair pulled away from the rest of the field.  Behind them, Jeremy Trank battled with Bob Buono and Carl Cleveland as Jared Hill came from the back of the field, looking to crack the top five.  On a lap 7 restart, the lead duo again pulled away as Eric Boynton tried to join into the fierce battle on the edge of the top five.  Hill’s run came to an end as he pulled off on a lap 16 caution.  At the checkers, Sutherland grabbed his second straight win over Winslow, followed by Boynton, Cleveland, and Buono.

The night’s regularly scheduled 4 Cylinder main saw Cody Baker, the winner of the held over event earlier in the night, start on the front row and grab the lead from Mike Stone and Dante Mancuso.  Billy Bowers made a gutsy move to steal the lead away on a lap 7 restart as Baker faded and fell out on lap 9.  Ray Hyer charged into the top three and was fighting for the lead on lap 11 when he lost a tire in turn 4 and hit the wall…and at the same time, Bowers’ car overheated and he dropped out.  Mike Stone, Nick Brown, and Adam Delgrosso wound up in a three way battle to the finish that ended with Stone winning, Brown second, and Delgrosso upside down in turn four.