New York was hit with some good and bad news this week.

Both highlight the need for government to work the right way in the coming months and years, to ensure the long-term health of New York, as well as the Finger Lakes.

The Finger Lakes Regional Tourism Council released the results of their market analysis, which was conducted by JLL – a Chicago-based firm known for its expertise in tourism and hospitality. They specialize in identifying strategy and their research in the Finger Lakes was designed to uncover the breakdown of current market segments that were visiting the region.

The results were telling: The biggest users of the Finger Lakes region were those who lived within a 400-mile radius. JLL found that the primary visitor to the Finger Lakes was older, without children in the home, living in a small town or rural environment with an upscale lifestyle.

The Finger Lakes Regional Tourism Council notes that over 4,000 tourism stakeholder surveys were sent out, which garnered heavy response from elected officials, businesses, and local organizations. Specifically, the survey received strong feedback from industries, which included the hotel/lodging, cultural institutions and museums. Local retailers also had a heavy response to the survey.

The goal of the study is to identify what those major players need to do to continue the growth pattern, which has been seen in the Finger Lakes within these segments. The council notes that they plan to focus their efforts in 2017 on marketing initiatives identified and supported by the results.

How easily will that mission be accomplished though, as New York saw another year of population decrease? 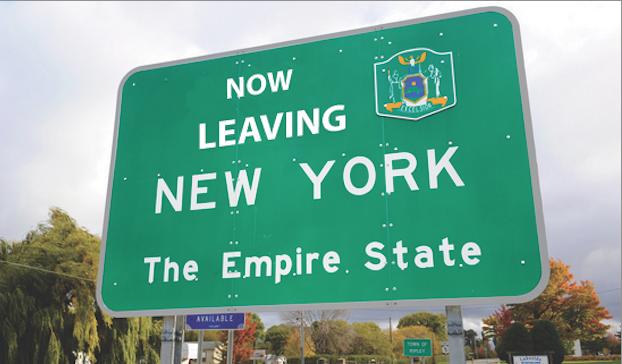 In a report published on Tuesday, the Empire Center said that 191,367 residents left New York for other states during the year, which ended on July 1st.

The U.S. Census Bureau makes yearly population estimates, which looks specifically at “net domestic migration.” In all, the report indicates that 846,669 people have left New York in the last six years.

The outflow of residents in the most-recent year is roughly equal to the fourth-largest city in New York. It’s also the fastest shrinking state in the U.S., which is a title no one wants to claim.

The Empire Center notes that those leaving New York are heading to southern states, which previously were viewed as states unsupportive of the kind of jobs that were prevalent in New York. Many note that while manufacturing is struggling throughout the U.S., it has particularly struggled in New York.

The degree of struggle is important since many ex-New Yorkers are finding work in states like Florida and North Carolina.

The new data put New York further behind Florida, which moved ahead into third place in total state population rankings two years ago. While New York’s population dipped, Florida gained another 367,525 residents in 2015-16. Texas led all states with a gain of 432,957 residents in that period.
Ranked by percentage growth, Utah, Nevada, Idaho and Florida topped the list.

One big question remains: What impact will a shrinking state have on the number of visitors the Finger Lakes region sees in the coming years?

Traffic primarily is driven from a small circle around the region, which means that at least a percentage of those visitors are coming from inside New York.