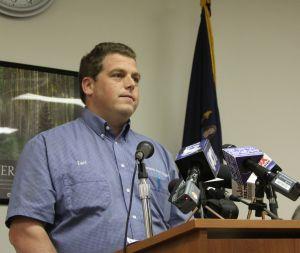 The Seneca County Industrial Development Agency will be leasing the 7,000-acres at the former-Seneca Army Depot.

That was the decision made after a lengthy executive session, where the IDA looked at the potential legality of leasing the Depot property to Earl Martin, owner of Seneca Ironworks instead of an outright purchase.

At least in the short-term.

The lease that was agreed on is a one-year document that will ensure that IDA receives the $900,000 they were promised in Martin’s bid for the property.

Ralph Lott spoke in favor of Martin’s potential lease during the public comment portion of the meeting. “[Martin] should be given a 50 year lease if he wants it,” he said during a particularly fiery portion of his message to the board. Lott is a former-member of the Seneca County IDA.

The nearly-unanimous vote in favor of the lease option, which saw only one member vote against it, will mean a one-year lease that will require Martin to come back to the board — if he wants to extend it.

Fayette Supervisor Cindy Lorenzetti, who serves on the IDA was the only nay vote when the board left a lengthy executive session to discuss the details of the lease, which were not made immediately available to the public after the vote took place.

Lorenzetti said after that she would liked to have seen the board put a concrete definition on the terms of the lease, which would prevent any extensions. Her motion to do so failed, which spurred the vote on the complete lease.

Anne Morgan, who is the assessor for Romulus, Varick, Lodi, and Ovid presented to the IDA board during the executive session. However, the details of her presentation were not made clear. Lorenzetti said that she was happy about Morgan presenting to the board, pointing out that it was her who pushed to have the presentation take place.

The lease option stemmed from the threat that the property had an assessment that was too high, which made much of what Martin was trying to accomplish unattainable. Opponents of the lease have argued that entering into such an agreement contradicts the original message and intent of the IDA, as well as the Seneca County Supervisors.

Both had said while going through the bid process that getting the property back into the ‘taxable’ category, which would be a benefit to Seneca County. In theory, a traditional lease would not have any positive impact on the overall ‘tax health’ of a community, or county.

Martin said that progress is happening at the former-Depot. During a presentation he said that there was extensive work being done to clear, and rehabilitate the fence, which was in worse condition than he originally expected. “It seems like holes are appearing behind us,” he quipped. “In reality, we’re probably just missing some — but we’re taking care of all of them,” he continued.

Martin said his team has been working to map utilities on the property, identify environmental and historical areas to eventually preserve, and clearing brush along the fence that makes accessing the property difficult.

He also said that his plan has evolved quite a bit throughout the last several months from what it originally was when he turned in his proposal to the IDA. Due to the overgrown, and downright wild nature of the property, many of his plans have had to evolve.