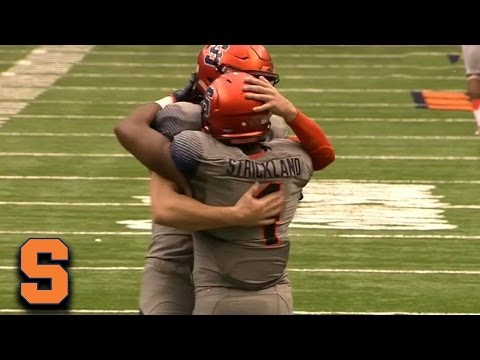 Surrounded by fans who stormed the field after Syracuse knocked off #17 Virginia Tech on Saturday night, Head Coach Dino Babers told ESPN just how important this game was for his team. Acknowledging the early struggles and close losses, he said “To get this game, right now, at this time, at this moment, this is big.” The win marked the first time the Orange defeated a ranked opponent since they beat Louisville in 2012. Orange fans, coaches, and players made sure the world knew. ESPNU cameras followed Babers into the locker room for his postgame speech, and it’s safe to say the decision paid off.

People in Vegas weren’t the only ones that didn’t think Syracuse had a shot. After a 28-9 loss to Wake Forest last week, comments on the Syracuse Orange Facebook page ranged from “The rest of the coaching staff needs to be fired,” to “The Orange probably belong in the Patriot league football wise.” After this win, however, comment sections had nothing but love for Dino and company.

When the coaching change was made this offseason, most fans knew it would come with growing pains in terms of personnel and playbooks. While this has been the case through seven games, there have been a fair amount of bright spots along the way. Finally, the Syracuse Orange are a team with an identity. Their fast pace has made Amba Etta-Tawo one of the most productive receivers in the nation, while Eric Dungey is flourishing statistically and threw 53 passes on Saturday. The team threw two halfback passes, one of which resulted in an 84 yard touchdown. Punting on every fourth down seems like a thing of the past.

Syracuse fans storming the field after the win over Virginia Tech. pic.twitter.com/TZXrfJVDnJ

The growing pains may be far from over, but the new era of Syracuse Football is certainly off to an exciting start. Points are being scored left and right, fields are being stormed, and jaws are being dropped. As Dino put it after the game “We are now a family. We’re an ohana. We’re la familia. Now we’re five fingers that are a fist.” Syracuse looks to use those five fingers to knockout Boston College when they meet on Saturday at 12:30.