Downtown Waterloo is transforming. Developer Lee Bieber started work last year on several storefronts, and after a short time — one very good diner has already come from that hard work. Revitalizing any downtown space is something that takes perseverance, seemingly endless effort, and most-importantly a shared vision. In downtown Waterloo, there is a diner that has only been open for a short time — but has quickly been gaining traction in the Finger Lakes food scene. Run by two downstate New Yorker’s who moved to the Finger Lakes just a few months before opening West Main Kitchen, it features local ingredients, scratch-made food, and a great deal of passion.General Manager Laura Rodriguez and Executive Chef Merrill Moore bring an experience like no other in downtown Waterloo through countless hours of preparation, local sourcing and plenty of imagination.Originally from New York City, both Rodriguez and Moore have spent their lives in the restaurant business. That shows from the moment patrons walk through the door. Most people will initially notice the bright and spacious feel West Main Kitchen has since it’s renovation.

The space went through a purposeful redesign and as Rodriguez pointed out — they aim for warm and inviting.Diner classics with an eye for flare. The unique things on the menu, which is in a constant state of evolution, according to Chef Moore are all focused on locally sourced items. Meats from Bostrom Farms — located just outside of Geneva, coffee from Ithaca, and ice cream from the Cayuga Lake Creamery — make this a diner doing local food right.Lunch started outwith a burger they call the “West Main Burger.” Available in a single, or double stack — I opted for the double. Two generously sized patties, locally sourced from Bostrom Farms, and melted together with a blend of cheese, and all of the burger essentials — like lettuce, tomato and onion. Chef Moore said that this is a tried-and-true staple that he has used on other menus over his years in the restaurant business. 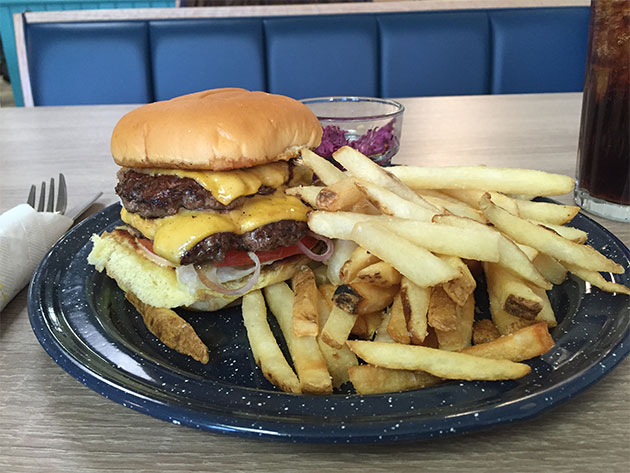 Leaving West Main Kitchen hungry or unsatisfied simply isn’t possible. Their menu is smart, diverse, and as I learned — includes an impressive selection of dessert items.Dessert included a traditional apple pie, which was paired with a gingersnap milkshake. Rodriguez said that they made it a point to ensure that they were pairing their apple pie with something unique that could help them stand out. The gingersnap ice cream works in perfect harmony with the apple pie, which of course is all locally sourced. The gingersnap ice cream is a staple item at the Cayuga Lake Creamery, which is precisely why Rodriguez felt so compelled to marry the two items on a plate. A great balance between heft and light — West Main Kitchen does dessert as well as they do breakfast or lunch.West Main Kitchen is a staple-in-the-making and their welcome into downtown Waterloo has been overwhelmingly positive. The evolution has only just begun and as the pair pointed out — the future looks very bright for this downtown diner.A conversation about the best diners in the Finger Lakes simply cannot happen without giving mention to this classic-in-the-making. West Main Kitchen delivers an exceptional experience, along with fantastic food.

Check out our interview with General Manager Laura Rodriguez and Executive Chef Merrill Moore, as they sat down with FingerLakes1.com to talk their experience, the restaurant business, and opening West Main Kitchen on Food in the Finger Lakes…