Winter weather has finally arrived in the Finger Lakes, as an Arctic blast of cold air makes its presence felt. On Monday, the region will experience some of its coldest temperatures felt since last February, with the National Weather Service in Buffalo noting that wind chills could reach near, or just below zero Monday and Monday night.However, while the cold weather will be a major factor when residents step out Monday morning — it is the snow forecast over the next 24-48 hours that is the major shakeup to our regional weather pattern.The National Weather Service in Buffalo issued a Lake Effect Snow Advisory for Ontario, Wayne, Monroe, Orleans, and Northern Cayuga counties heading through Sunday afternoon into Monday afternoon. The advisory begins on Sunday at 3 pm and runs until 1 pm on Monday — calling for as little as an inch of snow in some areas, to 8 inches of snow in more persistent bands. 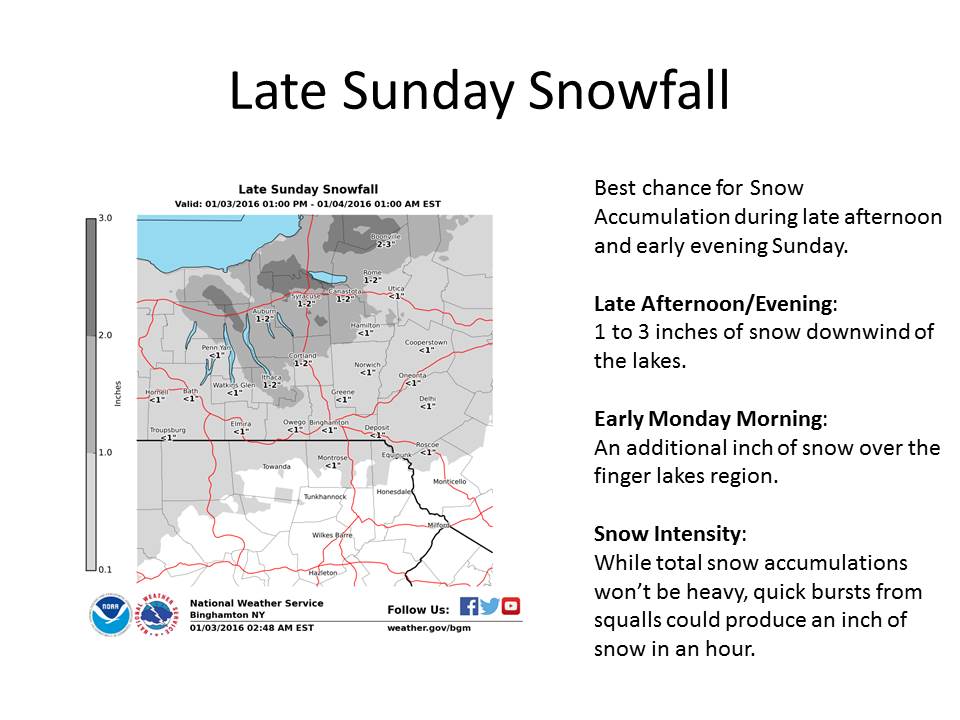 The National Weather Service also said that on Sunday a burst, or squall of snow would be possible as the Arctic front speeds through the region.Temperatures will slightly rebound by week’s end, as forecasted highs are expected to get back near 40 for the weekend.FLX BACK TO WORK FORECASTMondaySnow showers, mainly before 4pm. High near 15. North wind 13 to 15 mph. Chance of precipitation is 80%. New snow accumulation of around an inch possible.Monday NightA chance of snow showers, mainly before 3am. Mostly cloudy, with a low around 11. North wind 8 to 11 mph. Chance of precipitation is 50%.TuesdaySunny, with a high near 24. West wind around 7 mph becoming southwest in the afternoon.Tuesday NightMostly clear, with a low around 16.WednesdayMostly sunny, with a high near 37.ThursdayPartly sunny, with a high near 40.FridayMostly cloudy, with a high near 41.For the latest local forecast and live radar images visit the FingerLakes1.com FingerLakes1.com Local Weather Center.