Several local hospitals were named specifically as 754 hospitals were penalized by the federal government, which will result in their overall payments from Medicare reduced by 1%.

Tracking Hospital-Acquired Conditions, or HAC’s is something that has become commonplace over the last two years, and is a major provision within the Affordable Care Act. It tracks the HAC’s each hospital has, and at the end of the year, punishes those facilities that do not score lower than a 6.75 in their 0-10 scoring system. The penalties mean a 1% cut in Medicare funding for those hospitals scoring higher than 6.75 on the scale. Geneva General Hospital in Geneva, and Cayuga Medical Center in Ithaca, both were penalized and will face that reduction in Medicare reimbursement. Other hospitals in the region who were penalized included Crouse and St. Joseph’s in Syracuse. In all there were 46 hospitals in New York, which saw a penalty come their way. 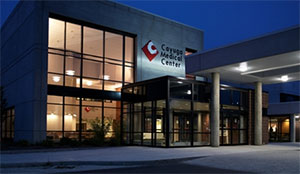 Medicare said that the penalties would result in a total $364 million in lost money for these hospitals nationally. It’s unclear how much of this money will come from New York specifically at this time. One hospital in the area, which has found itself the target of penalties like these frequently over the last several years is Auburn Community Hospital. However, Auburn remained off the list this year – and scored among the lowest in the entire region in the 0-10 scale. In central New York, Oswego Hospital scored the absolute best in the scale receiving a 3.Some officials from the hospitals in the area have contested the penalties, citing a lack of compete data. Some officials from the region also pointed to data being used that was from two or more years ago, as being a major problem. A hospital-acquired condition is when a patient develops something like an infection or bed sores, which can be life threatening. The problem though, many health officials say, is how susceptible some patients are to encountering these infections or bed sores when they’re admitted or spending a long period of time in the hospital. However, as Medicare points out – the overall goal is to reduce hospital-acquired conditions and eventually eliminate them. While they are fairly common, this has been a focal point of the health officials across the board. Crouse Hospital in Syracuse was penalized last year as well, under the same program for similar results. A complete list of all hospitals on the list can be found here. We reached out to Geneva General Hospital, which is run by Finger Lakes Health for comment, but did not receive a response at time of publishing. Report by Josh Durso for FingerLakes1.comFingerLakes1.com will update this story as more information and statements are released following the penalties.