Compelling, intense, and sobering, the Academy Award winning documentary film “Citizenfour” screens at The Smith Opera House on Wednesday, April 15 at 7:30 pm.Two years ago, Laura Poitras was deeply enmeshed in making a film about post-9/11 surveillance in the United States when she started receiving encrypted emails from someone identifying himself only as “citizen four.” The anonymous correspondent claimed to have information regarding secret domestic surveillance programs that were illegally invading the privacy of millions of Americans on an unprecedented scale. He told Poitras that he wanted to inform the American public of the existence of such programs-with her help. Half a year later she and acclaimed British journalist Glenn Greenwald had the first of many encounters with “citizen four”, the by now infamous Edward Snowden, in a Hong Kong hotel room. CITIZEN FOUR places the audience inside that room, literally and figuratively, at that first meeting and those that followed it, chronicling how Poitras and Greenwald struggled to channel the media storm that erupted after Snowden, a high-level analyst who had been contracted to work for the NSA, released a deluge of documents revealing the breadth and illegality of the NSA’s domestic surveillance program. 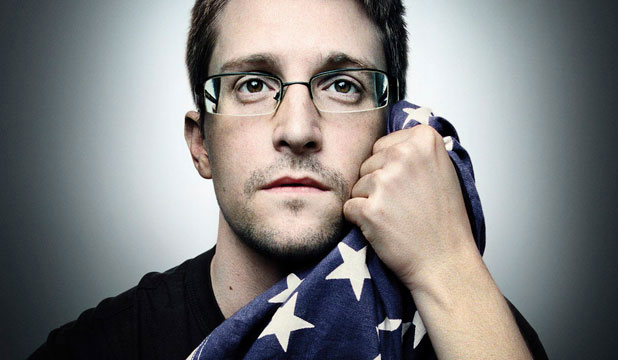 As such, CITIZEN is yet another devastatingly powerful documentary from Peabody Award-winning journalist, filmmaker, and artist Laura Poitras. Her first film, MY COUNTRY, MY COUNTRY (2006) focused on the Iraq war and was nominated for several awards, and her second, THE OATH (2010), disclosed discomfiting truths about the American detention facility at Guantanamo Bay. CITIZEN FOUR is the third film in that trilogy detailing the slow erosion of civil liberties in the United States following 9/11. In it, Poitras not only shows her audience the dangers of government surveillance, she makes them felt on a visceral level as the film registers the impact of the scrutiny and harrassment leveled at Poitras and Greenwald as they began to report Snowden’s incredible revelations to the wider world. The intimidation from various government agencies was so intense that in the last year alone she was awarded the International Documentary Association’s Courage Under Fire award, the Pulitzer Prize for Public Service, the International Reporters and Editors Medal, and a host of other awards praising her for her perseverance in unveiling facts those in power would prefer never saw the light of day. A victim of government surveillance as well as its unrelenting scourge, Poitras has crafted a provocative, thrilling documentary detailing the very real threat secret surveillance poses to American liberty, and the courage of those who seek to oppose it. This film is rated R and has a run time of 114 minutes. Tickets are $6 general admission, $5 students and seniors.The Smith Opera House is located at 82 Seneca Street in Geneva. Box Office Hours are Monday through Friday, 10 am to 5 pm and Saturday 10 am to 2 pm Phone: 315-781-5483. Email: boxoffice@thesmith.org For event listing and more information about The Smith and The Smith Center For The Arts, visit our website the smith.org