Truex, the Cup Series points leader, let a few cars pass him during the final stage and slowed his lap times down considerably in an effort to save maximum fuel to make it to the checkered flag. His strategy payed off as other front runners were forced to hit pit road for a splash of gas to finish the race. Read More | Results & Stats 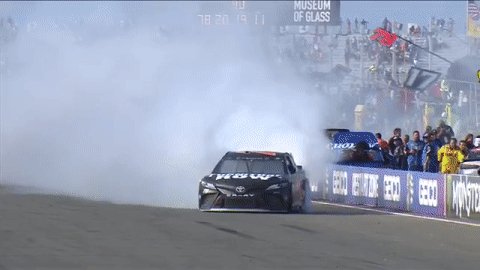 WINNER: Martin Truex Jr. earned his fourth victory of the season, holding off Matt Kenseth Sunday to win for the first time at the New York road course.

Got a minute? Check out the rapid recap of today’s thrilling race from @WGI! #NASCARonNBCSN #ILoveNY355 pic.twitter.com/VsS7ykRAlV

Fuel king!@MartinTruex_Jr saves enough fuel to capture the win AND to burn it down. #ILoveNY355 pic.twitter.com/V6xjSyWmhz

Another @WGI dustup for @KyleBusch and @Keselowski. What they had to say about. https://t.co/lAruKYSfLJ

No major shifts in the points standings, but they remain really tight near the cutoff line! #NASCARonNBCSN #VictoryLap pic.twitter.com/7oOitgNqa2

.@ColePearn had bittersweet weekend: his team won Sunday’s race @WGI, but he lost his best friend to death. https://t.co/KvGqqCAupY

Pit strategies were a study in contrasts during I Love New York 355 @WGI https://t.co/V7hqJjtdAu