Cornell football’s primary running back junior Chris Walker will miss the remainder of the 2017 season and “probably the first part of next year” after an injury sustained in the team’s 29-28 win over Princeton Saturday night, head coach David Archer ’05 said Tuesday afternoon.

With just over seven minutes played in the third quarter against the Tigers, Walker rushed the ball up the left side only to fall to the field with a non-contact injury and a buckling in his right knee. The junior immediately grabbed his right leg in pain and had to be helped off the field, making his touchdown earlier in the third quarter seem inconsequential. 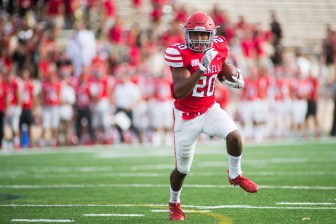 With Walker out, Cornell loses its leader in all-purpose yards through seven games this season. An All-Ivy first-team selection in 2016, Walker has regressed in the 2017 campaign in terms of offensive production, averaging 30 fewer yards per game on the ground and two yards less per carry.