Skip to content
»
Home > Monroe County > How much snow fell? NWS reports more than a foot in some places (full coverage)

The brunt of the accumulation is over after the first winter storm of the season dumped a significant amount of heavy, wet snow on the Finger Lakes. 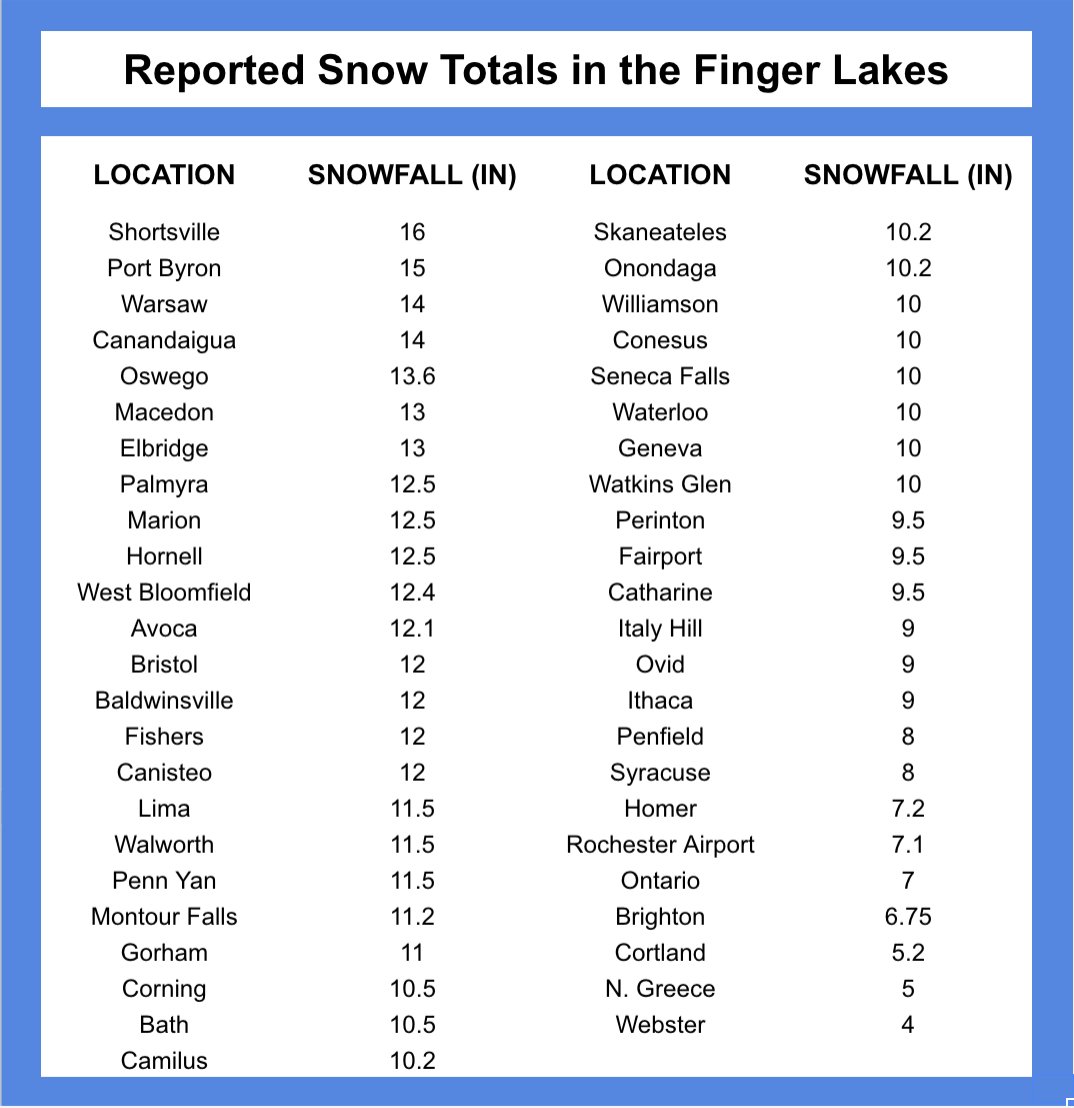 Skies will stay mostly cloudy throughout the day with the chance for breaks of sun during the afternoon.

Crews are out getting roadways cleared; and as one would imagine – it’s a slow go out there. Take your time heading out, and plan for extra commute time if you’re hitting the road before noon.

Temperatures will moderate this afternoon pushing into the mid- and upper-30s. Some locations may even reach 40 degrees. That said, it will help some of the snow showers that find their way into the region this afternoon turn to rain.

We’re getting reports from around the region on snowfall totals. Later today we’ll be updating a story with total accumulations on a community-by-community basis.

Stay tuned for that, which will be embedded in this story. Below is the daily almanac for the Finger Lakes, as well as the latest posts from social media, which showcase the snowfall in the Finger Lakes – as residents dig out.

Snow is over. Look at the totals and the rest of Friday's forecast pic.twitter.com/7pmUPyghbW

Here’s a look at Macedon, on 31, heading into Palmyra. Pal-Mac schools are closed today. Seeing more snow as we’ve been heading east. Our photographer John said the roads are better than when he came in this morning about 3 hours ago. Snow stopping is surely helping crews! pic.twitter.com/EatmEI1dyZ

Please be careful out there. We stopped to help this driver after he got stuck in a pile of snow in #clay He was coming off river road trying to turn onto 31E. Thankfully he was able to get out! @CNYcentral pic.twitter.com/bT30gV1Mcg

Snow totals continue to come in, and the flakes have been adding up as forecasted! #ROC #FLX #WX pic.twitter.com/MuvKLl2UAw

12 Corners plaza in Brighton…Roads are plowed and crews now working on the sidewalks… @news10nbc pic.twitter.com/cJlyYNffxr

Winter Storm Warnings remain in effect. Storm is wrapping up, but not before a final burst of snow as it leaves this morning. #pawx #nywx pic.twitter.com/qyXsgd2xDb

Extra time for the morning commute but overall this storm system is now pulling away with only a few leftover wet snow and even rain showers. Main roads will become just wet fairly quickly over the next hour or so. #RoadSpray #WNY https://t.co/C9QAevjCue pic.twitter.com/zBHIheTrqK

Heavy snow winding down by 6-7am. Rapid improvement during the morning hours. Join us at 430AM for a special early start of News 10NBC Today. pic.twitter.com/nMx5P3G7Xc

Checking the roads and conditions this morning for you at home! We left an extra hour for travel this morning so we can get to our location in Ontario County safe and sound. pic.twitter.com/4E34fcGaug

For the latest check out the FingerLakes1.com Weather Center. Don’t forget – we want to see pictures of the weather in your neighborhood! Click here to submit your OWN photos to be featured on FingerLakes1.com, or submit them to us on Facebook or Twitter.