Syracuse and Notre Dame arrived in the city of dreams with glorious postseason aspirations in the most meaningful college football game of the week.

The Fighting Irish (11-0) left with theirs intact, marching toward a spot in the College Football Playoff.

The Orange (8-3, 5-2 ACC), dreaming of an improbable New Year’s Six bowl in its third season under Dino Babers, had the identity that guided it to this stage shaken in a 36-3 loss that felt like it could’ve been by a wider margin in front of a sellout crowd of 48,104. Read more at Syracuse.com

We'll go back to work and prepare to finish the regular season strong at Boston College. pic.twitter.com/lQIrIaAitn

Start spreading the news, it is finally game day for ‘Cuse and Notre Dame in New York City.

Syracuse makes its ninth trip to Yankee Stadium when the No. 12 Orange face No. 3 Notre Dame (10-0) in their penultimate regular-season contest. Kickoff is set for 2:30 p.m. and the game will be televised nationally on NBC.

The Orange’s climb up the national polls continued for a third straight week after an emphatic 54-23 win versus Louisville Friday night. Syracuse checked in at No. 12 in both the Associated Press Top 25 poll and Amway Coaches Poll, its highest AP ranking since being ranked No. 11 on Sept. 28, 1998.

And Syracuse has no interest in stopping there. The focus has been on putting together the best second half of the season that it could and the team has responded by going 4-0 since its bye week. Now for head coach Dino Babers and the Orange, it’s a matchup against the storied Fighting Irish in one of the country’s most recognizable venues. Read More 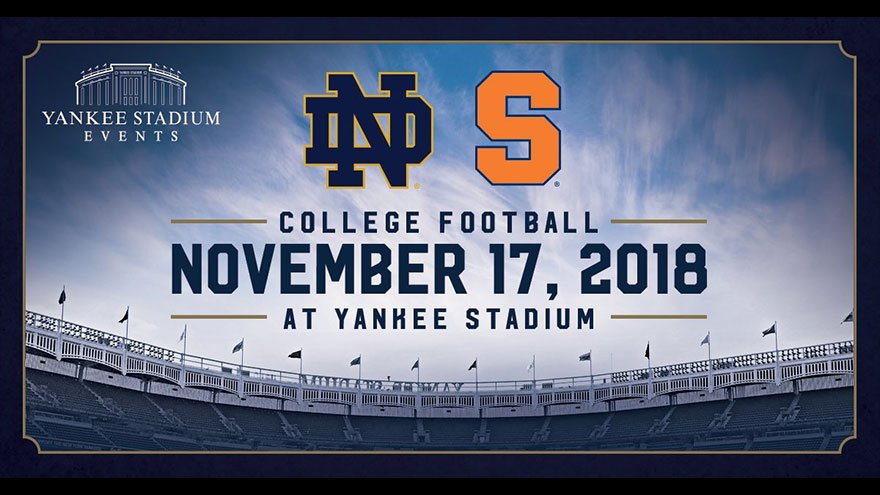 Help us Dino Babers, you're our only hope pic.twitter.com/HLGWia9Dxp

When #uNDefeated No. 3 @NDFootball and Syracuse meet on Saturday at 2:30 p.m. ET on NBC, there will plenty to watch.#GoIrish #BeatOrangehttps://t.co/5Q0rwZ4LVj

Using our Power Ratings, these would be the opening lines in a 16-team playoff.

We defended the Dome. Now we have to defend our state.

Hear what @CoachBabersCuse had to say before @CuseFootball's top-12 showdown at Yankee Stadium on Saturday in this week's 'Cuse Insider. pic.twitter.com/1tid2m8Pc1

Syracuse-Notre Dame is the Orange’s biggest game in years.@JohnCassillo of @NunesMagician breaks down their special season, and what they have to do to beat NDhttps://t.co/P6yFjLVL7mhttps://t.co/renhJoPQeT pic.twitter.com/HZg07o2y8k