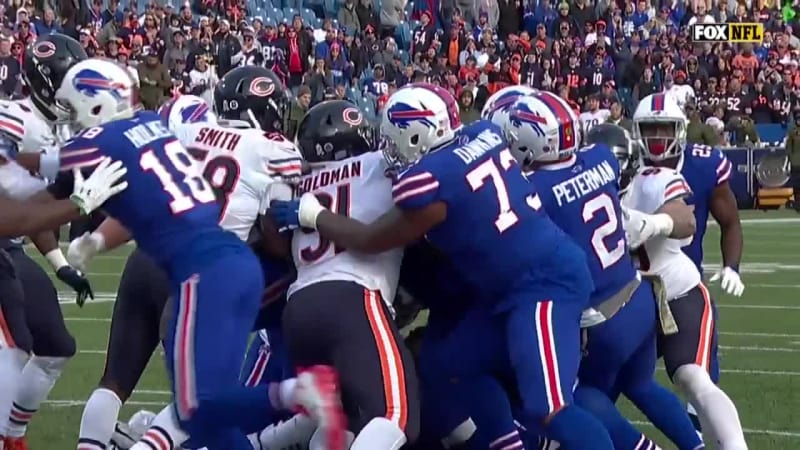 Buffalo’s offense showed signs of life late, but ultimately, a first half deficit of 28 points would prove to be too much to overcome in the 41-9 loss. The Bills dropped their Week 9 contest with the Bears by a score of

The offense struggled throughout the majority of the loss, not putting up their first points until the second half. Nathan Peterman was asked to throw early and often on Sunday, completing 31 of 49 passes for 189 yards. He also threw three interceptions.

Mitchell Trubisky completed just 12 passes on the day. The Bills held the dual-threat passer, who entered the game with 296 rushing yards on the season, to just one yard on the ground.

With the loss, the Bills fell to 2-7 on the season.

The Buffalo Bills host the Chicago Bears on Sunday, looking to get back on track after the hard-fought loss to the Patriots. Sitting at 2-6 with myriad injuries at the quarterback position, Sean McDermott’s team is already out of the playoff race, but that doesn’t mean that there is nothing to play for. Buffalo actually gets to start playing spoiler to all of those teams still in the race. First up are the Bears, who are leading the NFC North at 4-3. Matt Nagy’s team is bouncing back and forth between dominant performances and those that are far less so, but they still have an opportunity to win the division for the first time since 2010.

However, the Bills will have a much more difficult time achieving this goal due to multiple injuries. Rookie quarterback Josh Allen is still out due to the arm injury suffered against the Texans and is unlikely to return anytime soon. To make matters worse for Buffalo, recently signed free agent Derek Anderson has also been declared out, along with linebacker Tremaine Edmunds (concussion). The former Panthers backup quarterback suffered a concussion against the Patriots during his first start of the season, leaving to never return.

With Anderson out, the Bills will once again rely on Nathan Peterman while the recently-signed Matt Barkley sits in reserve. Read more at 247sports.com