The National Weather Service has issued a Flood Watch for most of the region – ahead of what forecasters are saying could be a significant rain event.

The watch begins Sunday evening, and continues through Monday night. Steady rain is expected to start during the evening hours on Sunday – continuing through the day on Monday. A large portion of New York, as result, could see upwards of 3 inches of rainfall. Though those amounts will vary and be localized.

The NWS in Binghamton reports that there is not much change to their previous forecast for a prolonged rainfall event. They are predicting rainfall amounts between 2 and 3 inches area-wide. 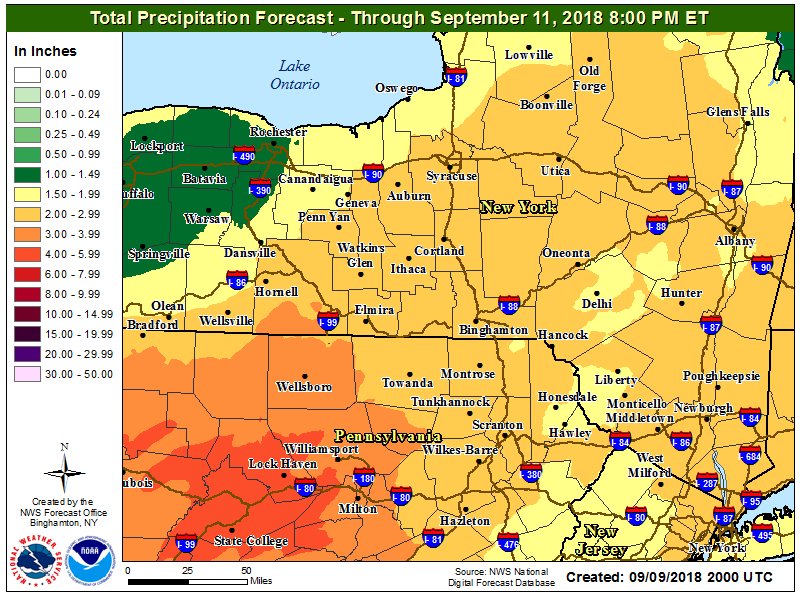 Forecasters with the National Weather Service say the prolonged period of steady or heavy rain could lead to rising waters and an elevated risk of flooding. Flash flooding will also be a threat if embedded thunderstorms develop during the afternoon hours on Monday.

The models vary from run to run (recent EURO runs attached) but I will stick with the original idea of a solid 1-2 inch rainfall coming to #Rochester and the #FingerLakes Sunday night and Monday. Best bet of locally higher amounts over the #FLX. #RocWx pic.twitter.com/nJW0fohgvs

The National Weather Service says residents should monitor forecasts and be alert for possible flood warnings, which could be issued during the event itself.

For the latest forecast information and latest local warnings – check out the FingerLakes1.com Weather Center.

Flood watches have been posted for the #FLX and #CNY through Tuesday morning. Nothing in #WNY as of this writing, we'll keep you posted. Looks like the steadiest rain will fall Monday. #ROC pic.twitter.com/f4513mB12q