Governor Andrew M. Cuomo announced an unprecedented $16.2 million investment to further enhance Watkins Glen’s transformation into a world-class destination and cultural center – all part of his ongoing efforts to revitalize the upstate economy and create opportunities for the Southern Tier. The projects announced today include $9.7 million for 14 Downtown Revitalization Initiative projects throughout the village and the new $6.5 million main entrance to Watkins Glen State Park as part of Governor Cuomo’s NY Parks 2020 program. The improvements are a component of Southern Tier Soaring, the region’s blueprint for economic growth.

“Watkins Glen is a New York State treasure, featuring its beautiful state park, an internationally renowned race track and a vibrant downtown,” Governor Cuomo said. “These projects and investments will continue to revitalize this area, boosting the economy and helping the Southern Tier soar. I congratulate Watkins Glen and its residents, businesses and leaders for working together with the state to bring these ideas to life as we usher in a new era for this Upstate gem.” 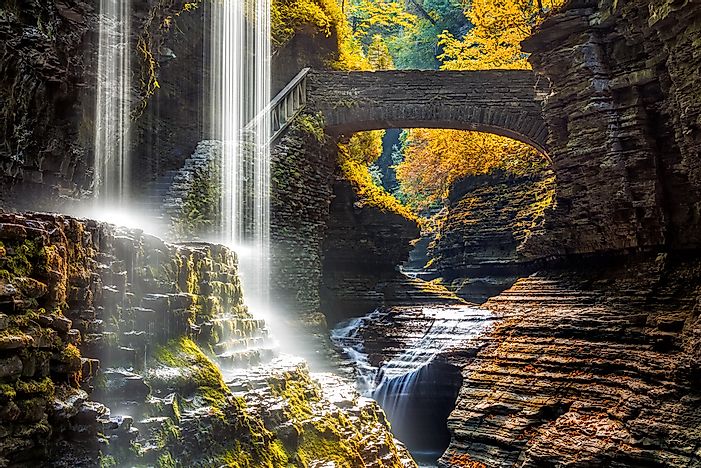 The projects were announced at the ribbon-cutting for a new main entrance to Watkins Glen State Park. The $6.5 million project converted a decrepit parking lot at the base of the gorge into green space, creating new park amenities and enhanced interpretation of Watkin Glen’s unique natural and cultural history. The project relocated a parking area away from the gorge and across Franklin Street to improve vehicular traffic flow on village streets and pedestrian traffic flow in the park. The old asphalt parking lot was transformed into a more natural landscaped park setting, including:

– A new visitor welcome center offering information about the park and other attractions in the region;

– A small outdoor amphitheater and improved educational displays on the park’s human history and natural and geologic features, including a touchable model of the gorge;

– A new viewing area where people unable to hike the gorge will be able to enjoy a dramatic waterfall;

– Renovation and expansion of the existing concession building with expanded Taste of NY offerings including local wines and craft beverages and locally sourced ingredients in the new café area; and

The Village of Watkins Glen was named a DRI Round 2 winner last year. The $9.7 million in specific projects to be funded through the initiative were announced today and include:

Installing New Lighting on Franklin Street in coordination with NYSDOT repaving work. Funds will be used to install conduit and foundations and purchase new fixtures once the below-grade work is completed. ($1,500,000)

Improving East 4th Street for Pedestrians and Cyclists and Improving Connection between Downtown and Clute Park, a major corridor to encourage residents and visitors to walk or bicycle between the locations. Improvements will include wider sidewalks, landscaping and pedestrian-activated crossing at Boat Launch Road. ($1,034,565)

Redeveloping Captain Bill’s Port of Seneca Lake to Improve Site Plan and Enhance Views, including construction of a two-story building to house Captain Bill’s Seneca Lake Cruise Terminal. The project will allow the company to expand operations to include event space and include redesign of the site that will enhance views of the lake and draw visitors to the waterfront. ($500,000)

Renovating the Former VFW Building into a Full-Service Spa and Fitness Center for guests of the Watkins Glen Harbor Hotel, as well as other visitors and local residents. ($250,000)

Updating the Zoning Code to Address Short Term Rentals, Design Guidelines, Historic Districts, and Other Revisions, to encourage appropriate type and scale of development consistent with the village character. The changes will address the challenges of a short-term high demand seasonal rental housing market and update design guidelines. ($50,000)

Redeveloping 109-111 North Franklin St. with Mixed-Uses to include additional ground floor commercial space and 24 mixed-income apartments on the second and third floors. The project will accommodate the existing brewery and restaurant on-site, and provide open-concept co-working space operated by FLX Works, including a shared commercial kitchen for hourly rental. ($1,000,000)

Installing Gateway and Wayfinding Signage to welcome visitors at four major gateways to the Village. Wayfinding signage will orient pedestrians, cyclists, and drivers while promoting local businesses and attractions. ($644,875)

Transforming Multiple Buildings and Sites in the DRI Area, including improvements to building façades, increasing upper story long-term housing, improving or expanding commercial space, and supporting new businesses. A local entity will administer the program providing five property owners with matching funds of up to 50 percent. ($1,039,585)

Revitalizing the Vacant Filling Station and Repair Shop at 15 North Franklin Street for commercial and residential uses. Improvements will include facade and roof renovations, interior improvements, and landscaping of this strategic northern gateway site. ($287,500)

Developing a new Mixed-Income Housing and Childcare Center on a vacant site owned by the Watkins Glen Housing Authority. Forty-two apartment units and a 5,000-square foot daycare center will be designed to fit into the existing character of the neighborhood. ($500,000)

Combined with the recent $7.2 million investment announced to improve State Route 14 from the Village of Watkins Glen to the Town of Reading, Governor Cuomo’s commitment to the Southern Tier community has reached more than $23 million so far this year. Additionally, Governor Cuomo announced that the Village has become part of the Local Waterfront Revitalization Program to manage resources along the Seneca Canal system, securing this beautiful resource for generations to come.

Watkins Glen Mayor Sam Schimizzi said, “Thank you Governor Cuomo for investing in not only the Watkins Glen State Park, but by investing in our economic growth through our 10 million dollar DRI award. The new main entrance looks amazing and we very much look forward to the transformational projects that will soon begin in our downtown. It will be exciting to see the enhancements to our village and how the investments will strengthen our community.”