The Hobart lacrosse team rallied from an early deficit to take No. 19 Robert Morris to overtime, but the visiting Colonials escaped Boswell Field with a 10-9 victory thanks to junior Matt Schmidt’s game winner 1:07 into OT.

Statesman junior Matthew Pedicine dominated the faceoff X, winning 17-of-23 on the day while grabbing a career-high matching 12 ground balls. From late in the second quarter to early in regulation, he won 13 faceoffs in a row, but Hobart caught an unlucky break on the faceoff to start overtime.

In OT, the ground ball battle to start the session stretched from midfield all the way back to the middle of Hobart’s defensive zone where a Statesman long-pole tried to sweep the loose ball back toward the end line. Unfortunately, the push had too much on it and it rolled out of bounds before sophomore goalie Sam Lucchesi could run it down. About a minute later, Schmidt tucked a shot under the crossbar from 10 yards out. 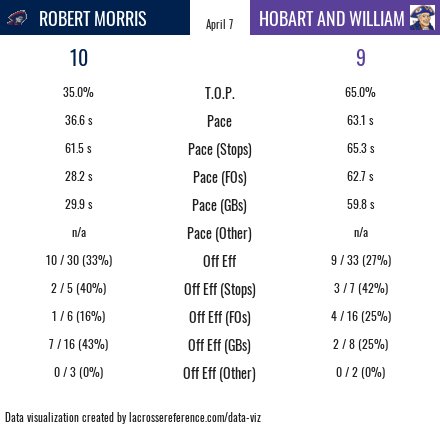