Cayuga County Sheriff David Gould provided an update to the fatal accident that crews responded to in Fleming on Saturday.

Gould says the investigation remains active, and identified those involved in the crash.

He reports that Stephen S. Landon, of Skaneateles was traveling north in a 2016 Honda Accord, which crossed the center line and collided with a second vehicle, operated by Travis Manwaring, of Auburn.

Gould says that Manwaring, who had three passengers inside his vehicle were unable to avoid the collision, which happened in the southbound lane.

Manwaring was pronounced dead at the scene, according to Gould. The other three victims from Manwaring’s vehicle were identified as Jessica Bohall, Matthew McIntosh and Zachary McIntosh.

All four others suffered non-life-threatening injuries, according to the Sheriff, but were transported to Upstate Medical Center by two helicopters and two ambulances.

The investigation into the accident remains active. Gould says that the Cayuga County Scene Reconstruction Team responded and that further information would be released at its conclusion.

Sheriff David Gould says one person was killed, and four others were transported to Upstate Medical Center after a two-car accident last night in Fleming.

Around 9:33 p.m. a two-car crash was reported on Route 34 around Fleming Scipio Townline Road.

Sheriff Gould says that of the four victims transported to Upstate Medical Center, two of them were airlifted, and another two were transported via ambulances. 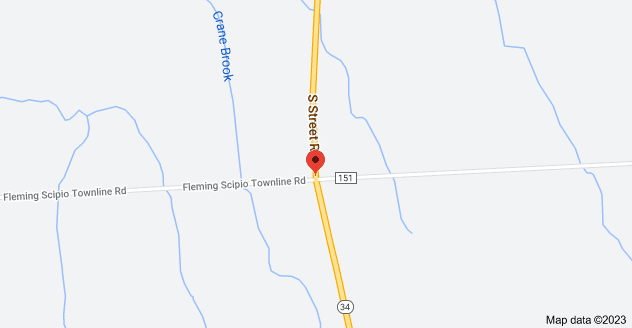 AMR and TLC ambulance units responded to the scene — each bringing two units. Southern Cayuga Ambulance was also called to the scene, according to first responders.

However, of the helicopters requested to the scene — both LifeNet and Mercy units had to respond.

Around 10:15 p.m. one patient was successfully extricated from the scene and airlifted by Mercy Flight to Upstate Medical Center in Syracuse.

Around 10:24 p.m. a second patient was extricated from the scene and transported via AMR Ambulance to Upstate Medical Center.

Around the same time the third helicopter, which was coming from Canandaigua was cancelled.

As of 10:32 p.m. all patients had been extricated. The third patient was transported via LifeNet to Upstate Medical Center.

Port Byron, Saves and Jordan Ambulance crews were on standby during the initial response to the crash. Aurelius, Poplar Ridge and Sennett fire companies were still on standby as of 10:56 p.m.

First responders say that the scene was being treated as a ‘crime scene’ once the patients were extricated. Two units from the Cayuga County Sheriff’s Office were also reportedly heading to Upstate University Hospital. However neither details were confirmed by law enforcement.

He says more information will be released when the investigation is complete.