Dru Carnevale hit a deep three-pointer from 23 feet with just under 30 seconds left in the fourth quarter to give the Golden Eagles a 2 point lead over East Rochester on Monday night. Then , with about 12 seconds left, Matt Cicero scored on a right-handed lay-up and was fouled. The senior would miss the ensuing free-throw and John Lexer would foul Carnevale on the rebound sending Clyde to the free-throw line. Carnevale would miss the front-end but Clyde would grab the offensive rebound and Carnevale would return to the line where he would convert as the Golden Eagles escape with the win to move to 4-0 on the season and move one-half game ahead of Lyons in the early Wayne County league standings. (Photo gallery at D&C website) 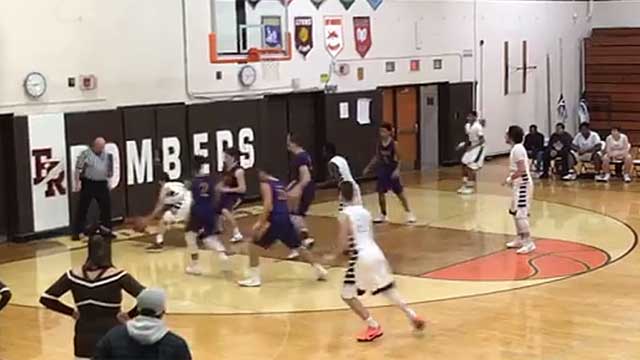 This game was rescheduled from last Wednesday due to lake effect snow that cancelled school. No time to reflect on the missed opportunity for the Bombers who travel to the Atwood Gymnasium on Tuesday night to take on Lyons. C-S is also in-action again as they will travel to Williamson.

There was one other Wayne County boys game on Monday night as the Gananda Blue Panthers improved to 5-3 with a 77-44 win at home over North Rose-Wolcott. NR-W falls to 1-4.

The only other boys game on Monday night featured a pair of Finger Lakes West rivals as Romulus hosted South Seneca. The Warriors jumped out to a 30-22 lead at halftime and still led comfortable at 42-33 after the third quarter. The Falcons came storming back but Romulus held on, 52-51, for their first win of the season. South Seneca dropped to 2-2 on the season. Romulus is now 1-4.

There was only two girls basketball games on Monday night involving Wayne-Finger Lakes teams. Neither score has been reported at the time of this posting. We will update the results on Tuesday morning.

At Keshequa tonight, Belfast’s Adam Enders was in the mood for some history, becoming the program’s all-time scorer (1,404 points) with this shot in the 2nd quarter of their 67-37 win to move to 4-0.
We’ll have more in Tomorrow’s @wellsvilledaily. #SectionV (📱@JeffEnders) pic.twitter.com/ZyOfl2uke7