The first full night of Finger Lakes West boys varsity basketball action had everything fans of the league could hope for. Two games decided by one possession and a Honeoye Bulldog scoring his 1,000th point.

The Honeoye Bulldogs won their first game of the season on Wednesday night, travelling to southern Yates County to defeat Dundee, 45-36 in overtime. Dundee was held scoreless in the overtime period. Honeoye senior Jon Marble scored his 1,000th career point in the win. Marble finished with a game high 16 points in the win. The Bulldogs improve to 1-2 on the season and the Scots fall to 2-1.

Boys hoops: @HoneoyeSports tops Dundee, 44-36. Senior Jon Marble not only leads Bulldogs with 16 points, he scores the 1,000th point of his career. So when you see Marbs in the hallway tomorrow, a high-five or two is in order. 🤚🤛🤚

Bloomfield was the last Finger Lakes West team to take to the court to open the season after their opener against Lima-Christian was postponed. They would head into the Wolves den at HAC on Wednesday night to face a team that had played four, and won them all. Coach Jon Mastin’s Bombers snuck by undefeated HAC to bring home a 62-60 win. Pat Geitner lead Bloomfield with 23 points while Alexander Roach scored 15 points to go along with 12 rebounds and 4 assists. For HAC, Xavier Israel had 23 points and teammate Ryan Hilton cleaned the glass for a career best 23 rebounds in the loss. 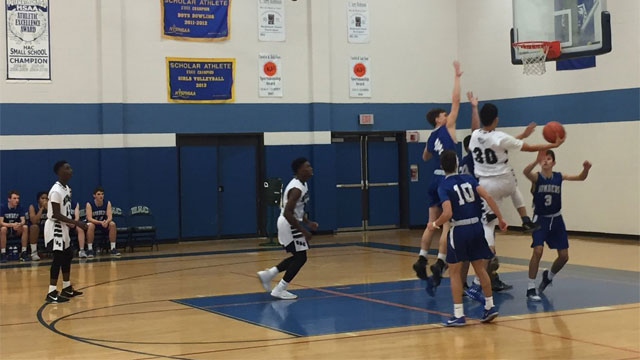 The Marcus Whitman Wildcats headed down to the Vine Valley to face Naples and gutted out a 10 point win, 59-49. It was a sloppy game with Naples committing 16 first half turnover and Whitman shooting just 19% from the field in the second half. Riley McLoud scored 19 points and grabbed 9 rebounds, Jon Donovan scored 12 points, Tim Cornish dished out 4 assists, and Seth Benedict shot 9-12 from the free throw line for a total of 13 points in the win. Nick Green led Naples with 10 points.

South Seneca defeated Red Jacket 42-41 at the Jack Guinan Gynmasium in Ovid to open their season at 1-0.

The only other boys game in the Wayne-Finger Lakes last night saw Livonia visit Midlakes and defeat the Screaming Eagles, 62-49. Livonia improves to 2-0 on the season. Midlakes was led by senior point guard Bryce Burri’s 19 points while fellow senior Dan VanNostrand scored 14.

The Canandaigua Braves were also in action losing 70-67 at Pittsford-Sutherland.

Don’t miss a key early season league Wayne County match-up tonight with Gananda visiting Clyde-Savannah in a game that can be heard live on FingerLakes1.com Radio and re-streamed at 11:00 pm with full video on FL1 Sports. Jim Sinicropi and Kevin Sharp will have the call.

Gananda defended their home court against Sodus running away with a 52-33 win. Peyton Daeffler led the Blue Panthers with 12 points while Emma Drake scored 10 points, hauled in 9 rebounds and added 5 assists and 4 steals. Cassie Prinsen and Brianna Trotta scored 8 each.

Finally, in the girls’ version of the Route 31 rivalry, Lyons hosted and defeated Clyde-Savannah 64-27 behind 19 points, 5 assists and 6 steals from Caiden Crego. Adrianna Kemp was also dominant finishing with 17 points, 12 rebounds and 4 assists.