The Mynderse Academy boys basketball team hosted Avon on Monday night and after a little more than a quarter of play, the Braves faithful knew it would be a long drive back to Livingston County. Under first-year Mynderse head coach Kevin Korzeniewski, the Blue Devils jumped out to a 28-2 lead just 2 minutes into the 2nd quarter at Arthur L. Baker Gymnasium in Seneca Falls.

Mynderse employed full court pressure defense and a fast-paced offense in which the ball seemed to be constantly pushed up the floor. They forced turnover after turnover and mostly converted the takeaways to points quickly. 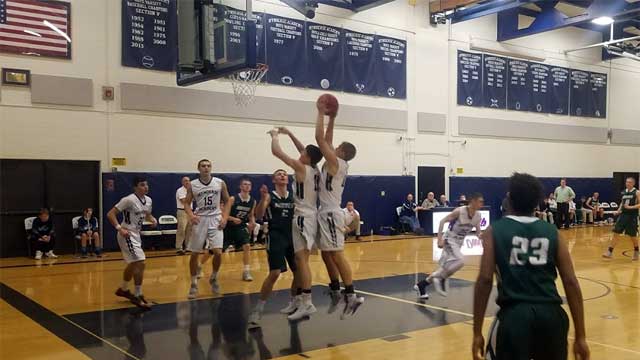 By the end of the contest, all 11 players on the Blue Devils roster scored and Mynderse cruised to a 68-38 win in their first home game of the season improving their record to 2-0.

After the game, Coach Korzeniewski said, “the kids love our style of play”. Adding, “they’re all buying in but we have a lot of work to do”.

Next up for Mynderse is a rematch of last season’s Section V Class B title game when they visit Newark on Friday night to open up Finger Lakes East play. That game will be streamed live on FingerLakes1.com beginning at 7:30 pm. Brendan Harrington and Tane Robinson will have the call for FL1 Sports.

The Gananda Blue Panthers hosted Williamson to open their Wayne County league schedule and blew past the Marauders to a 64-35 win. Gananda will be in action again on Thursday night at Clyde-Savannah in game that can be heard live on FingerLakes1.com Radio and then re-streamed live with full game video at 11:00 pm EST. Jim Sinicropi and Kevin Sharp will have the call for FL1 Sports.

Honeoye lost to Notre-Dame Batavia 63-35 after shooting just 20% from the field. Jon Marble led the Bulldogs’ scoring with 15.

At the half Notre Dame of Batavia leads the host Bulldogs of Honeoye 28-16. @HoneoyeSports @sectvbb pic.twitter.com/h1qNB2ZUbK

There were no W-FL girls teams in action on Monday night.