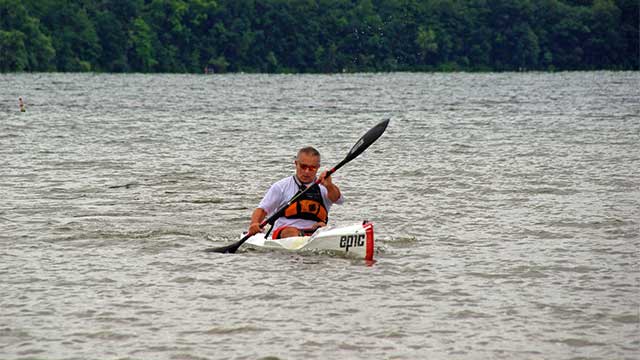 The first place winner in the male division was Adam Dwyer, who paddled the course in 33:10 minutes, and the first place female winner was Christina Colaluca who finished in 44:35 minutes. Winners in each of twelve different divisions were awarded a medal.

The three age divisions were Open (18-39), Masters (40-59) and Seniors (60 and over). Categories were broken down into Male, Female, and Pair/Team/Double. The type-of-craft categories included Single Canoe, Single Kayak, Double Canoe, Tandem Kayak, and Stand-up Paddle Board (SUP).

New this year was the stand-up paddle board category, which attracted one female participant, Kirstjan Seago, who completed the course in 74:30 minutes despite the wind and waves. Also new was the Family Fun Paddle, which took place after the 5K race had ended.

Contestants paddled a diamond-shaped marked course around the north end of Keuka Lake’s west branch beginning and ending at the museum’s Townsend-Grady Wildlife Preserve at the mouth of Sugar Creek, in an event that benefited the Finger Lakes Museum & Aquarium.

Thirty volunteer safety monitors worked at the museum’s launch site and in the water to ensure that the paddlers were safe. The three top sponsors for the event were Broccolo Tree & Lawn Care, L.L. Bean, and Wegmans. Food service was provided by Crooked Lake Mercantile, Mountain Rise Organics, and Wegmans. Race planning, administration, and timekeeping were provided by Taryn Windheim of Finger Lakes Racing Events for the second year in a row.

The third annual Paddle Keuka 5K race is scheduled for the first Saturday in August 2018.