For South Seneca Falcon senior Emily Lavarnway, being given a hero’s welcome upon arrival home from a NYSPHSAA competition may be something she is getting accustomed to.

The siren’s blared from the Ovid Fire Department leading the way into Seneca County and Ovid announcing the arrival of the stellar South Seneca athlete back home following her stunning successful defense of the New York State Federation Pentathlon Championship. Lavarnway, won the Division 2 state title as a junior. This year, she not only accomplished that feat, but one upped that performance by winning the overall state title. She did so in dramatic fashion literally racing from behind to win the 800 meter race to vault to the title, beating out state runner-up Alexandria Payne from Jamesville-Dewitt. She beat out five top Division1 athletes before the next Division 2 athlete placed.

Odds were not in her favor heading into today as she closed out yesterday in 6th place at the end of day one’s events. Unnerved and determined, she moved up a notch into fifth following the long jump but her personal best in the 800 meter run clinched the state title. She also achieved a personal best in the hurdles.

Emily was also a standout on the Falcons girls championship basketball team a year ago and state final four team this season, and excelled on the soccer field as well.

Emily was exuberant in thanking her coaches, parents and teammates upon arrival back at the South Seneca campus, where she thanked well wishers and calling her five event championship journey, “amazing,” and that she felt, “on top of the world” and, “ecstatic”. Coaches, David Zeitz, Drew Hilker and Ken Ovenshire expressed tremendous pride and joy in Emily’s achievement. In becoming the top Pentathlete in all of New York State, Zeitz called the victory, “a monumental accomplishment for Emily, her family, and team.” Lavarnway is the daughter of Tom and Kathy Lavarnway of Ovid, NY. Emily will take her talents to SUNY Geneseo in the fall where she plans to be a member of both the track and basketball squads. 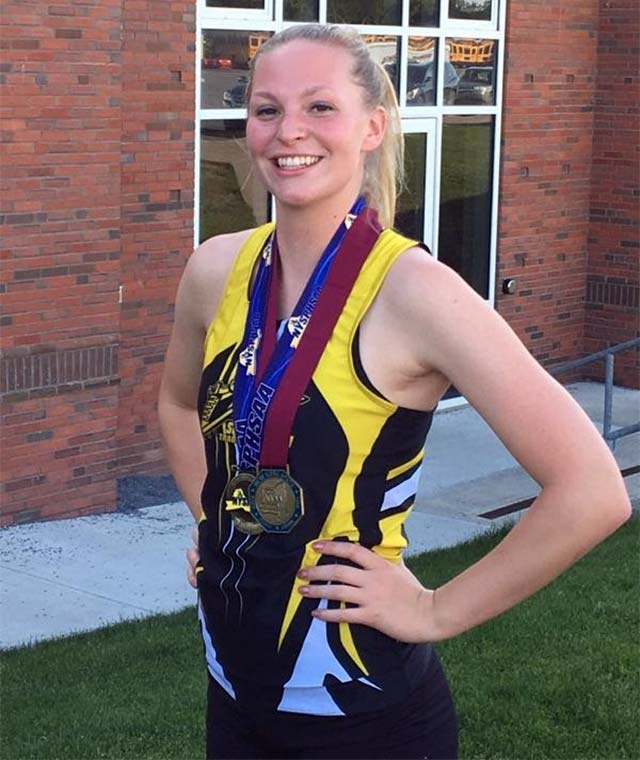