On Friday, the Geneva Police Department arrested another individual involved in an ongoing drug sale investigation in the City of Geneva.

Markiesha M. Henley, 25, of Geneva was charged with first-degree criminal sale of a controlled substance, and is being held for arraignment in Ontario County Court. 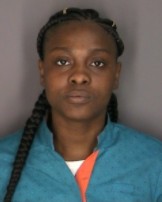 She was arrested after an Ontario County Court Indictment was issued for her arrest. She is accused of being involved in a drug sales throughout the city. Cocaine and money were seized during the investigation and subsequent arrest.

Read the other arrests and investigation activity below:

On Tuesday, May 30th around 11:45 am members of the Geneva Police Department Drug Enforcement Unit charged a Geneva man with selling cocaine throughout the city after an Ontario County Court Indictment was issued.

Maurice O. “Flash Maxon, 32, of Geneva was charged with second-degree criminal sale of a controlled substance after a lengthy investigation.

He is accused of selling cocaine throughout the city. As result of the investigation, cocaine, cash, and a vehicle were seized.

A second arrest took place around 11:07 am on Wednesday and resulted in the arrest of Aubrey “Boot” Reed, 38, of Geneva. He was charged with second-degree criminal sale of a controlled substance.

Police say the arrest is a direct result of the investigation and arrest of Maxon, which took place on Tuesday. Police also say that Reed had been selling cocaine throughout the city over an extended period of time. Cocaine and cash were both seized during the arrest.

Additional felony charges and arrests are pending, according to the Geneva Police Department.