The Seneca Falls Town Board held a public hearing on a potential eminent domain claim on Wednesday, which involved a trail that runs along the canal.

Under a proposed plan by Barton & Loguidice a sewer line would be placed underneath and along the sculpture trail. The sewer line would exist to handle the increased flow from new users outside Seneca Falls. 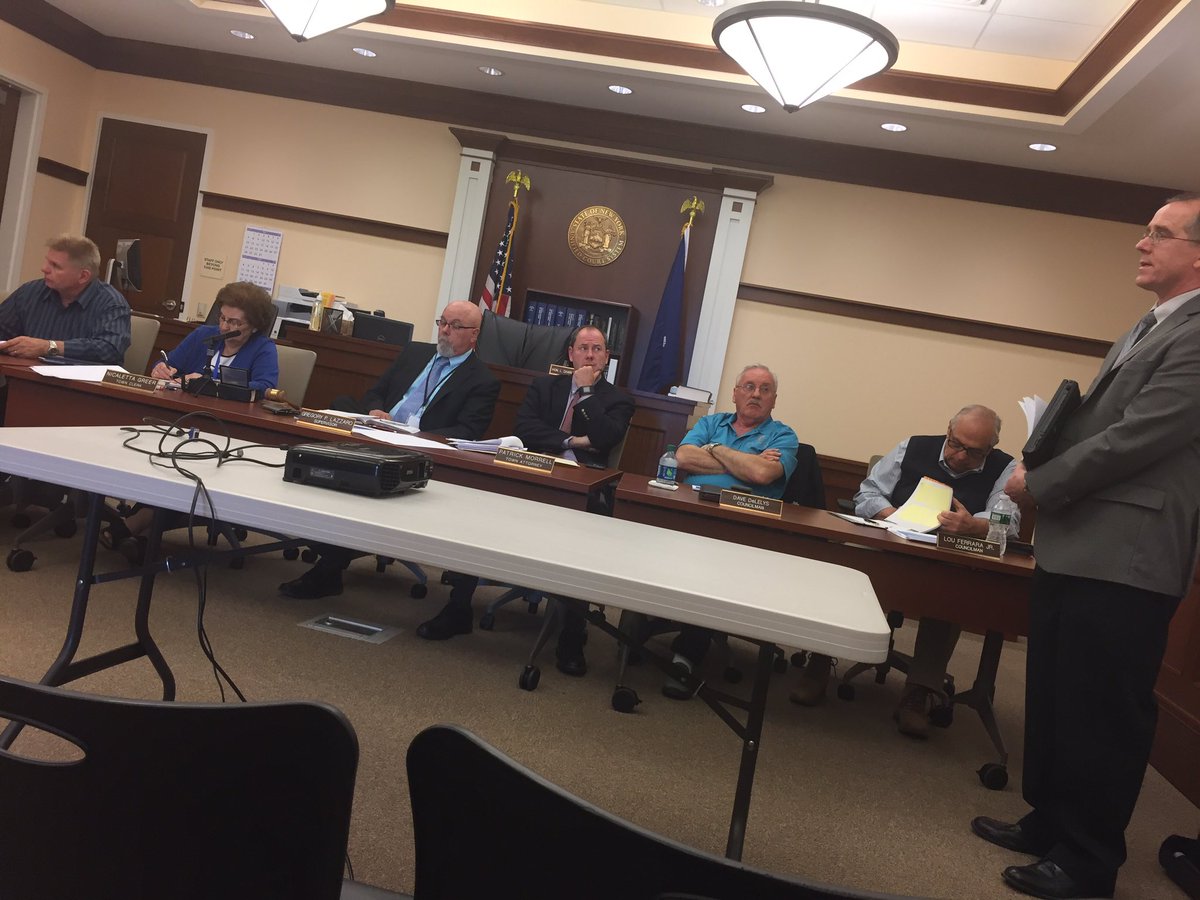 Part of the discussed project will be funded by del Lago Resort & Casino, as part of their original agreement, which brings their wastewater to the Seneca Falls Treatment Plant.

Two main problems engineers are looking to correct include a bottleneck of flow at the Ovid St. bridge, as well as necessary updates to the 50-year-old Kingdom Road Pump Station.

The mid-1960s era pump station is in need of improvements to maintain compliance with the DEC.

A few local speakers addressed the board concerning some of the logistics of making the project a reality, due to the potential damage that could be done to the trail. 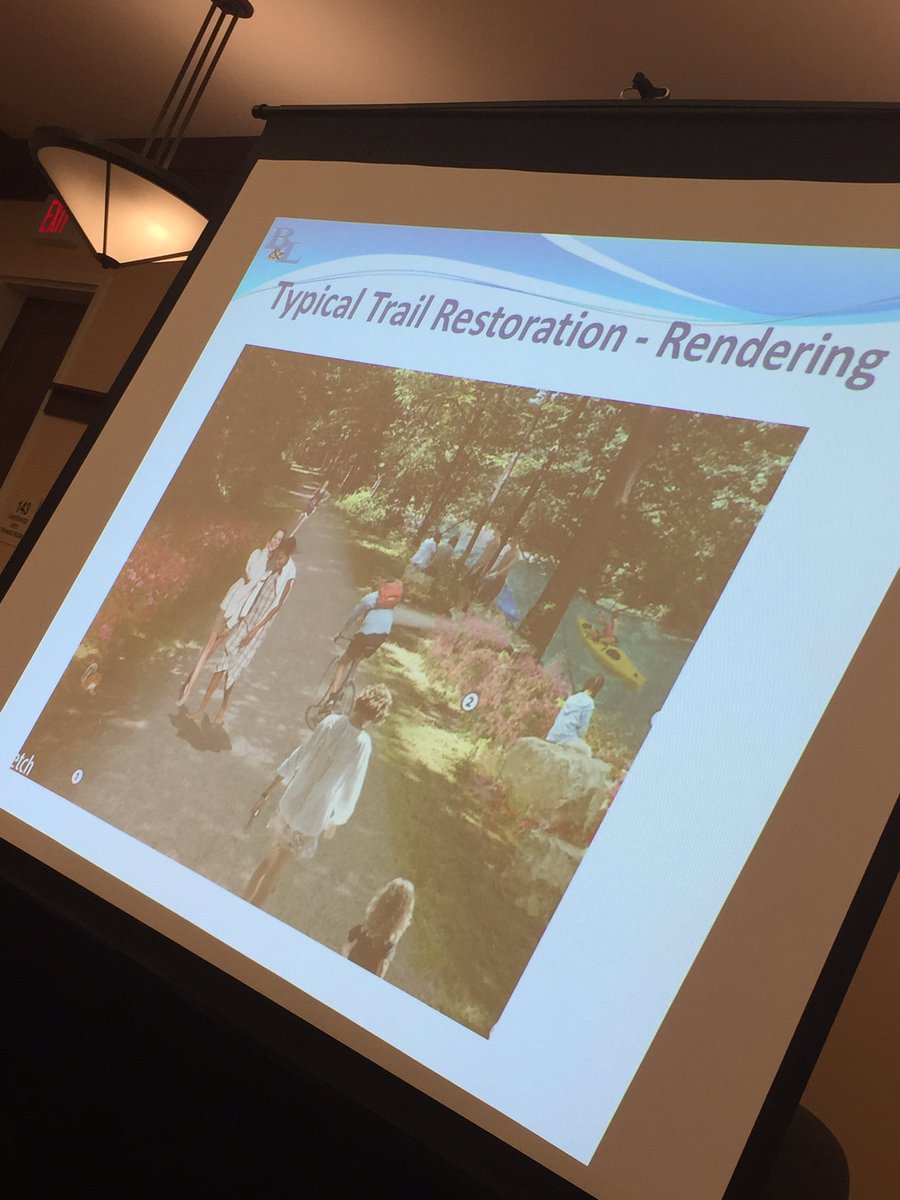 Alternatives to crossing to River Rd. and coming down the Ludovico Trail were expensive, according to engineers.

Peter Baker of B&L gave a presentation to the board and those in attendance. Baker explained that there would have been ‘significant cost’ associated with utilizing either of the other options.

If not taking the sewer line down the Ludovico Trail — it would need to go down Fall St. or River Rd., which would continue through Bayard St.

Those options would prove challenging. Baker added, “It wasn’t cost-effective and would be very disruptive.” 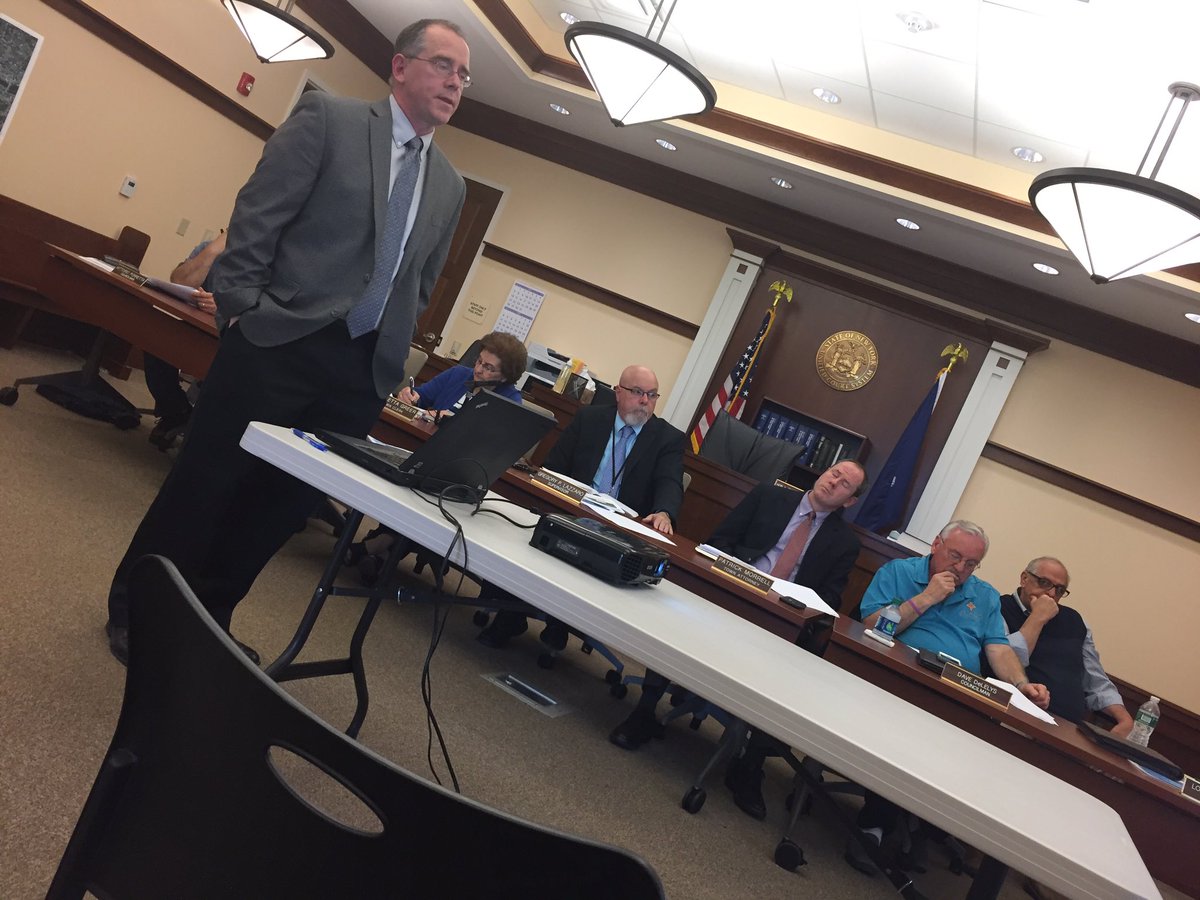 That’s why B&L suggested taking advantage of the trail property.

Wilhelmina Pusmucans, Founder and Director of the Friends of Frank J. Ludovico Sculpture Trail Corp., has negotiating power in the claim. However, due to health issues she was unable to attend the Public Hearing on Wednesday.

Supervisor Greg Lazzaro and Town Attorney Pat Morrell said that communication has been difficult, but that both believe an amicable end is possible.

Part of the proposal by B&L would “restore” and “improve” the condition of the trail, according to Baker’s presentation. He noted that the focus would be on expanding the trail to New York State Canal Corp. standards — making it more easily used when the weather doesn’t cooperate. “It will be a more robust trail when the Town is done with it,” Baker added.

Both engineers and Town officials agreed that impacting or moving statues was not something they wanted to do. 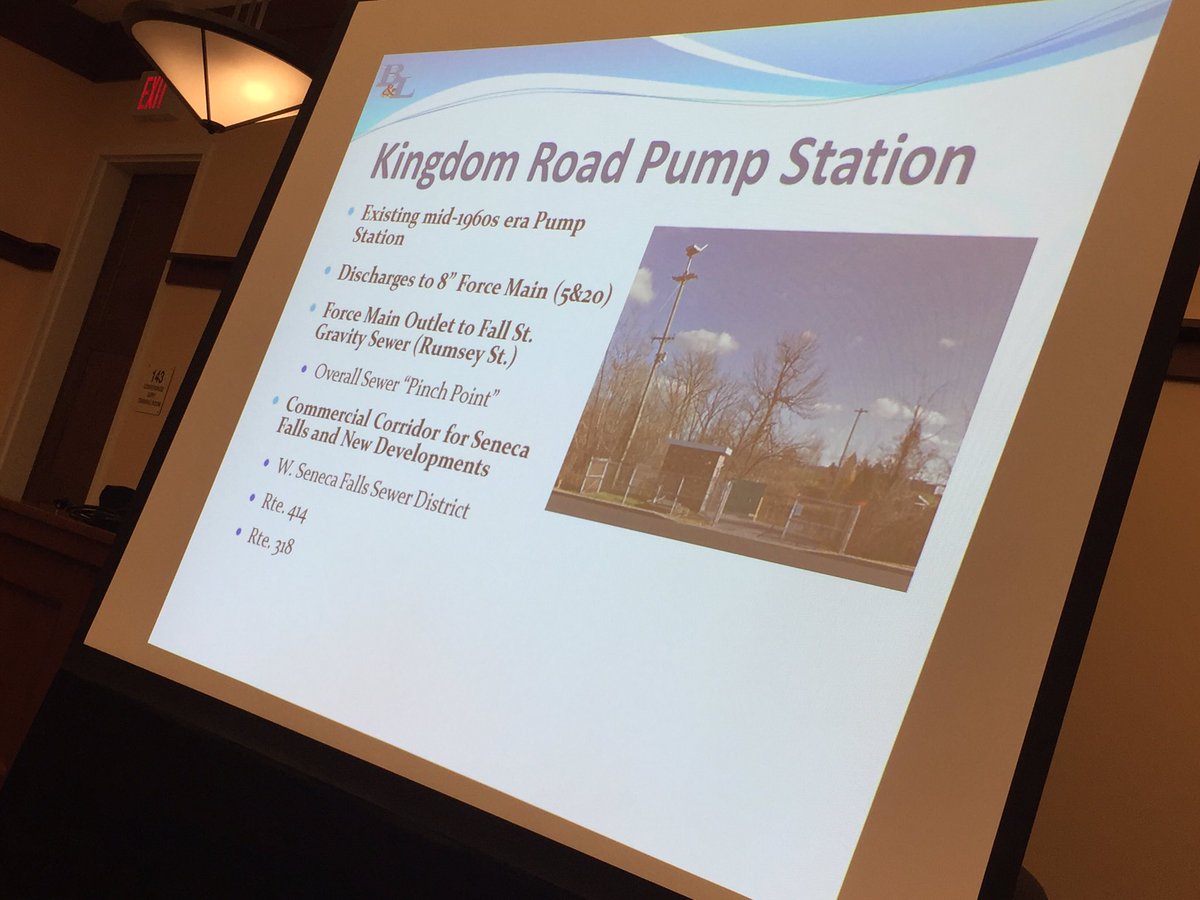 One speaker pointed out that the sewer line seemed to be going in to benefit a few businesses outside of Seneca Falls, who could presumably pay more to have greater accommodation made to the trail. “Why not make the trail even better?” asked one speaker. Another added, “Why don’t we just connect the trail to Waterloo? It has to be done anyway.”

Both of those questions were directed at Baker, who was giving the presentation, but were fitting questions for elected officials seated at the meeting.

Supervisor Lazzaro said that he liked the idea, and that the board would look at ways to accomplish those efforts.

As for residents in the area, if the Bayard St. option would followed, it would impact more than 50 homeowners. The Ludovico Trail option will not impact any homeowners and will provide the Town with the opportunity to move through the project more freely.

“We already take care of some maintenance items on the trail,” Lazzaro added. While it isn’t required that the Town perform any maintenance on the trail, as would be required after the sewer line was installed underneath it — the Town has done some in good faith.

All parties involved noted that they would go back and attempt to reconnect with Pusmucans, as well as her legal representation to get an agreement signed.

That would avoid any eminent domain proceeding beyond today’s hearing.

Lazzaro continued, “It would only lead to bigger and better for the Trail. We’re not looking to remove anything.” The engineers added that removing any of the large features that were placed by representatives of the Trail would be costly, too, since many are large and heavy. 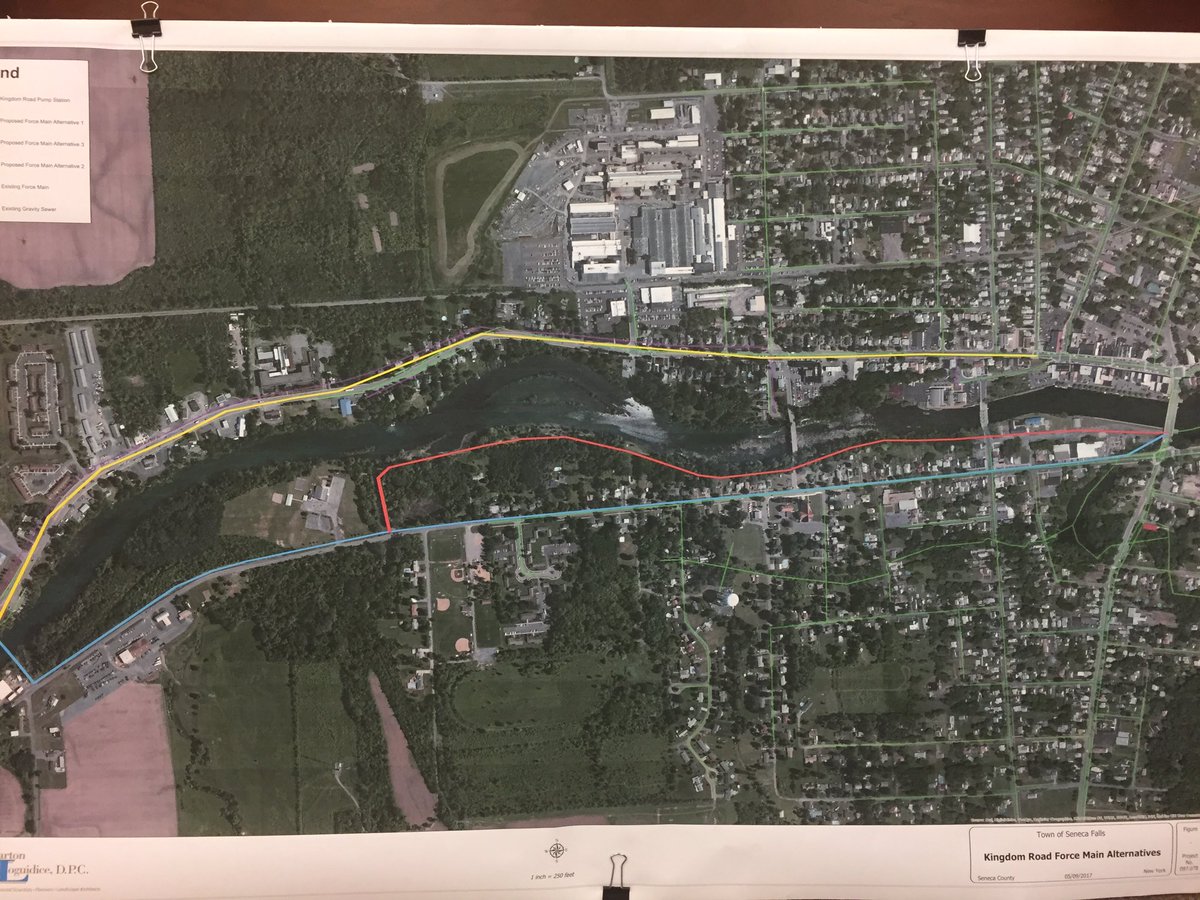 Users of the system, like del Lago, Nice & Easy, Petro and others pay 1.5 times the rate of “Town” users, which is an added benefit of accepting that wastewater.

The Treatment Plant in Seneca Falls isn’t anywhere near capacity, either. “It’s under utilized,” Baker explained.

The long-term goal of the project will be to funnel the wastewater currently being handled at the Waterloo Premium Outlet Mall, as well as the New York State Thruway rest stop in Junius to the Seneca Falls Treatment Plant.

By doing this it will reduce the per-user cost in Seneca Falls, and provide the system efficiency that comes with utilizing the treatment plant the way it was intended.

No date was set for the meeting, and only three speakers had public comments placed into the record.