Five Finger Lakes East boys varsity basketball teams were in action on Wednesday night against out-of-league opponents and all five notched victories. League play is well underway in Wayne County and six teams squared off last night including a barn burner in Gananda. Full results and more below…

Syracuse IT 60 at Palmyra-Macedon 79
Last Friday night, Syracuse Institute of Technology held a one-point lead over Jamesville-Dewitt at Onondaga Community College before J-D secured a 66-55 win. Last night, Syracuse Tech travelled west to face Pal-Mac in their home gym and the Red Raiders were anything but gracious hosts handing their guests a 79-60 win. Pal-Mac’s offense was powered by Hunter VanDeVelde who poured in 31 points and Damien Wright with 16. Pal-Mac evens their record at 1-1. 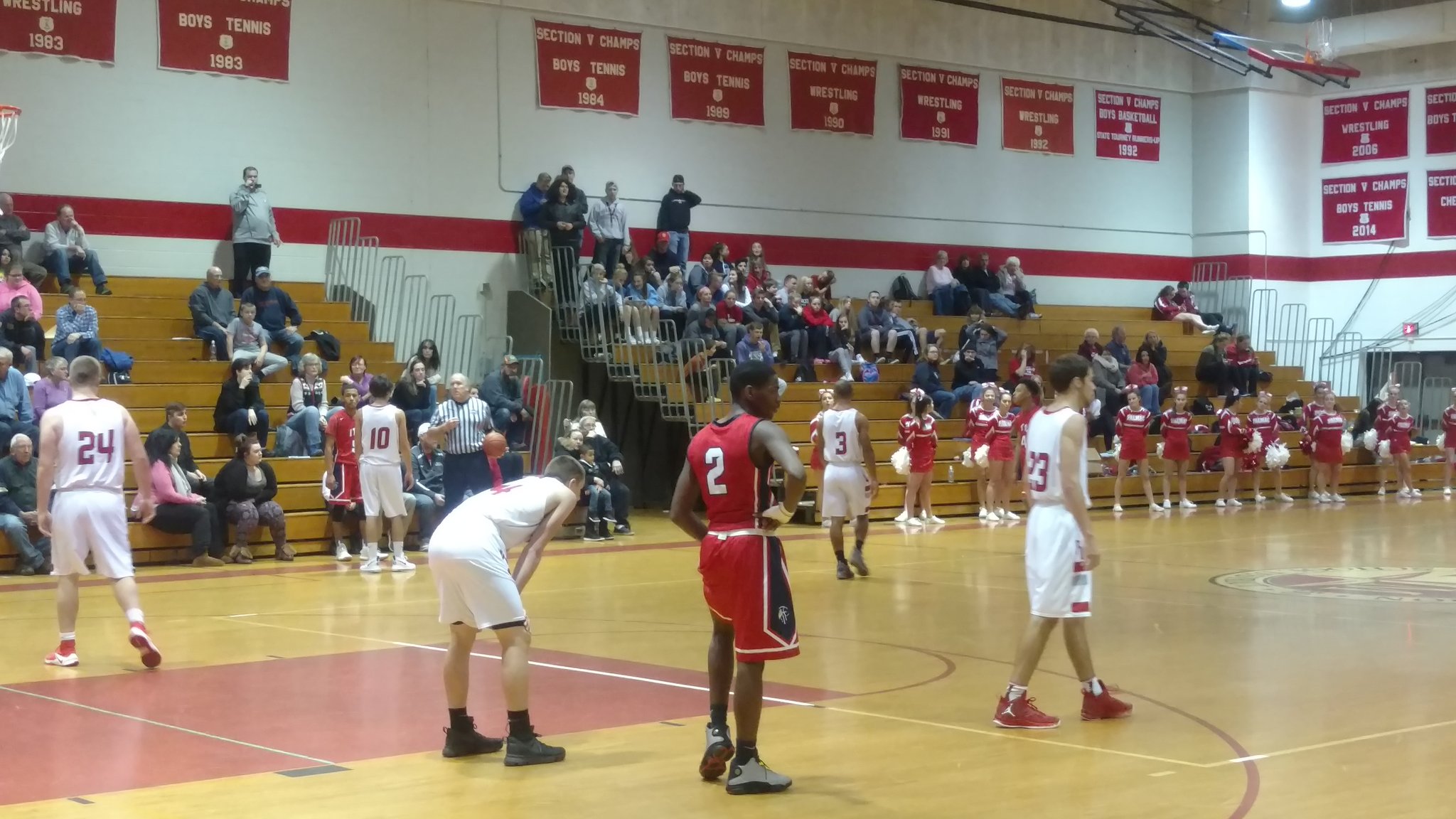 Verus 36 at Geneva 45
The Geneva Panthers evened their season record at 2-2 with a 9-point win at home over Vertus. A balanced Panther attack was led by Raheem Holmes with 13 points and Tyler Tyson with 12.  Akim Hudson also scored 7 while recording 12 rebounds.

Penn Yan 46 at Wellsville 36
The Wellsville Lions are coming off of back-to-back Sectional titles and would play host to the Penn Yan Mustangs on Wednesday night. Marty Gibson’s Penn Yan squad won a low-scoring affair, 46-36. Desmond Battin and Dylan Stape scored 16 points each to lead the Mustang scoring. David Lawson scored 18 for Wellsville in the loss. Penn Yan has now won two-straight after dropping their opener to Weedsport last Friday night.

Mynderse 55 at Avon 30
Mynderse Academy took a long drive to Avon and continued their perfect start to the 2016-17 season coming away with a 25-point win and improving their record to 6-0. Blue Devil junior Devin Anderson had his second straight game with 5 three-pointers and finished with 17. Senior big man Jake Mein scored 17 and junior Quinten Battle pitched in with 9. For Avon, Nick Rowland led the scoring with 10. Next up for Mynderse, a date with East rival Newark at Arthur L. Baker Gymnasium on Friday night in a game that can be seen live on FingerLakes1.com.

Wayne 53 at Greece-Olympia 23
Wayne improved to 2-0 on the season after holding Greece-Olympia to just 23 points on Wednesday night. Nick Carmichael led the Eagle scoring with 15.

Marion 29 at East Rochester 76
East Rochester is now 2-0 in Wayne County play and 4-0 overall after defeating Marion, 76-29. Casey Michele led all scorers with 18 points while his teamated were filling up the boxscore. Matt Cicero had 12 points, 6 assists and 8 steals. John Lexer scored 13 and grabbed 12 rebounds. Shamire Caraway also hit double-digits in rebounding with 10. Ben Pope added 10 points in the win. Rodney DeLyser scored 12 for the Black Knights.

Sodus 57 at Gananda 61
In the most hotly contested game of the night, Gananda used a 17-7 fourth quarter to edge Sodus by 4. Sodus held a six point lead after the third quarter but couldn’t hold off the Blue Panthers in the fourth. Enrique Mosman scored 20 and teammate Jayden Castrecini scored 17. For Sodus, Danny Johnson had 13 and Greg Coe scored 10.

Red Jacket 46 at HAC 38
Red Jacket’s Sydney Close had 19 points to lead all scorers to go along with 7 rebounds as the Indians defeated Harley Allendale-Columbia by 8. Red Jacket had 3 players with double-digit rebounds… Rachel Anderson with 14, Olivia Spencer with 11, and Hailey Willis with 10. Adelaide Flood  led the scoring for the Lady Wolves with 18 in the loss.

Clyde-Savannah at Sodus
East Rochester at Williamson
Mynderse at Bishop Kearney (LIVE on fingerlakesonlineradio.com at 6)
Gananda at Marion
Hornell at Penn Yan (96.9/101.9/1570 WFLR)

HUGE!!! Win for the boys tonight after trailing all game they came back and won with a final score of 61-57

I just want to be at my Christmas decorated house, drinking hot chocolate and watching Christmas movies. But a thing called finals ruins it.

No one talk to me

@CaRedSea huge congrats to the boys on their 49-46 win over Sutherland!! #bravesnation

Bombers improve to 4-0 their 76-29 win over Marion. Casey Michele had a game high 18 points while John Lexer had 13 points 12 rebounds #ERVB