The Syracuse Orange football team opened up the Dino Babers’ era with a victory last weekend over Colgate. On Friday night they open up their ACC schedule against Louisville in the Carrier Dome. Louisville, also 1-0, will be the first real test for Dino Babers and the Orange. Below, our Keith Bremer gives five things to look for as the Orange and Cardinals clash… 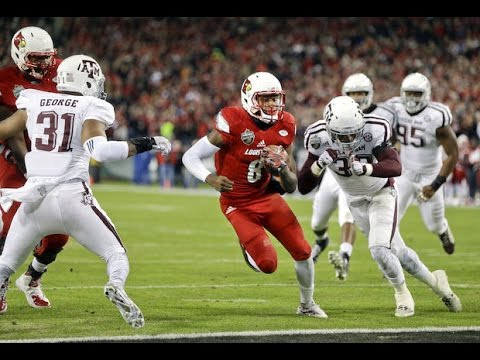 If the Heisman trophy was chosen after one game, Louisville’s sophomore quarterback Lamar Jackson would have a very good shot at taking home the award. Jackson punched in a school-record eight touchdowns (6 passing and 2 rushing) by halftime against Charlotte. That’s right, without playing a snap in the second half, Jackson showed his star power in a contest that the Cardinals eventually won 70-14. While Louisville comes in as the clear favorite, there is no doubt that this is a matchup between two high-powered offenses. If the Orange are able to fight for the upset, they will have to contain one of the best players in all of college football.

As soon as Syracuse hired Dino Babers, it became evident that they would be running a fast paced no-huddle offense. What caught the eye of Louisville Head Coach Bobby Petrino was that the offense was so fast that at times, the chains were not even set when the ball was snapped. “You’ve got to let the chains get down before they can snap the ball again.” said Petrino Wednesday. Babers responded by saying “I was always under the impression that the (down) box was the most important thing. If the box was set than the chains could come later.” According to Stephen Bailey of Syracuse.com, ACC coordinator of football officiating Dennis Hennigan ended the debate, saying that Babers had the correct interpretation.

Highlighted by a 43 yard touchdown grab, the fifth-year graduate transfer from Maryland had quite the Syracuse debut against Colgate. His 12 catches for 210 yards were good for ACC receiver of the week honors, and fifth on the school’s all-time list for receiving yards in a single game. If Etta-Tawo can keep playing at a high level, he and senior wideout Steve Ishmael should make for a versatile tandem at the wide receiver position. It helps that quarterback Eric Dungey was firing on all cylinders in Game 1, connecting on 34 of his 40 attempts for 355 yards of passing offense on the day.

For months now, this primetime matchup has been promoted as an “Orange Out.” The team is wearing all orange, and the Athletics Department even facilitated a contest where fans could submit their favorite t-shirt design, and the one with the most votes would be printed. Fast forward a few months, the shirts are for sale, the fans are eager, and the game will be broadcast on ESPN2. While the Carrier Dome may not be as packed as when the Orange took on LSU last season, there should be a great crowd as Syracuse looks to pull off the big upset in Game 2 of the Dino Babers era.

Outside of a 49 yard touchdown on true freshman Moe Neal’s first collegiate carry, the Orange failed to establish a rhythm in the running game against Colgate. Dontae Strickland, who was used as a hybrid last year, won the starting job this offseason over his roommate and the team’s leading rusher, Jordan Fredericks. It was a tough game for Strickland, netting just 20 yards on 9 carries. Fredericks, who averaged 5.7 yard per carry last season, had just 4 carries for 10 yards. As a team, they finished with 117 rushing yards, so it’s not that concerning as of right now. However, if Syracuse wants to keep pace with Louisville, establishing a strong running game certainly couldn’t hurt.

Tickets are still available and the game will be televised on ESPN 2 at 8 pm.