The Newark Pilots (20-11) came out ahead in a close game with the Red Wings on Tuesday at Colburn Park. The win propels the Pilots to 6-1 on the season series with one game remaining on July 23.Geneva got on the board first after stringing together three consecutive singles off Newark starter Ryan Wesson (Northeast Miss. C.C.) to go up 2-0 in the second. Wesson would settle into to quite a groove giving up just two after the second inning on his way to his third win of the season.“I was keeping the ball down and changing speeds,” Wesson said of his outing. “Little dinkers off the bat were shooting through, but in the end they didn’t get things going enough to score runs on me.” 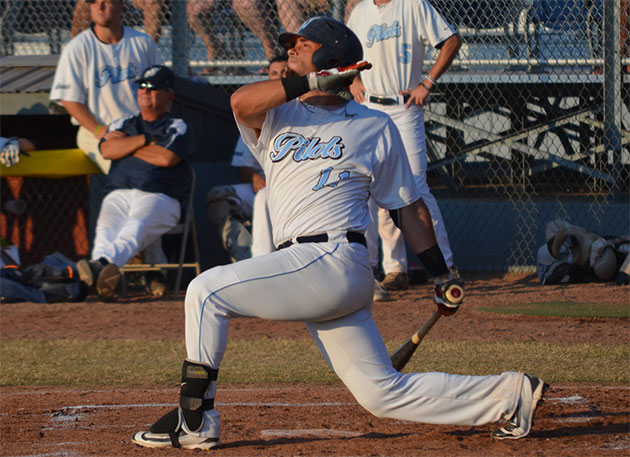 Wesson only had three strikeouts, which is an atypical performance, but it allowed him to keep his pitch count down and throw eight strong innings of two-run ball. Pitching late into the game also allowed Pilots head coach Chris Edmondson to use only one arm out the bullpen.“That’s huge,” Wesson said of saving the bullpen. “Especially going to Elmira tomorrow. We’re going to need everybody so that was huge for us to save a lot of arms tonight.”The Pilots offense was led by Sam Fragale (Virginia Tech) who hit a two-run home run in the second, starting in just his second game for the team. Fragale’s home run was the 11th of the year for the Pilots, which ranks them second in the Perfect Game Collegiate Baseball League.“We knew he had some power coming in,” Edmondson said of Fragale’s home run. “We were hoping to see it early and he just got a good pitch that he could hit and he put a good swing on it.”Tied 2-2 entering the seventh with Chris Sharpe (UMass-Lowell) and Julian Gallup (Niagara) in motion on the play, Chase Cockrell (Hinds C.C.) sent a shot to the right center gap that scored both runners and gave Newark a 4-2 lead. In what was a tight game from start to finish, this hit proved to be the winning blow.“Facing that pitcher three times, I knew he wasn’t going to beat me with anything,” Cockrell said of his game-winning hit. “So I was just going to sit fastball and react to off-speed. He left me a fastball on the outside corner and I just hit it where it was pitched… It’s been a rough summer but it’s getting better after that.”Pilots closer Brian Dolan (UMass-Lowell) came in and threw a 1-2-3 ninth inning to earn his league-leading seventh save of the summer.The Pilots will travel to Elmira to take on the Pioneers at Dunn Field on Wednesday. First pitch is scheduled for 7:05 p.m.