When all is said and done about 1,800 people will call the del Lago Resort & Casino their employer.On Friday, del Lago Resort & Casino hosted a topping off ceremony, which was highlighted by hoisting the final piece of steel to the top of the entertainment structure. That structure is a 40,000 square foot entertainment venue, which will hold as many as 2,500 people.Co-Chairmen Thomas Wilmot Sr. and Brent Stevens called it “another milestone in our effort to build Upstate New York’s best resort and casino.” Currently, 200 steelworkers have been going at it to ensure that the facility will be ready for opening in early-2017. In the last month, two major hires have been announced at del Lago, with the addition of Jeff Babinski as executive vice president and general manager — as well as Juris Basens, who will serve as senior vice president and assistant general manager.Jeff Babinski explained that within about a week, the entertainment facility will have a “weather-tight roof,” which will allow for “more intensive indoor work to begin.” Babinski continued in a statement, “As the weather warms up, we’re going to see more and more construction and tradespeople at del Lago.” 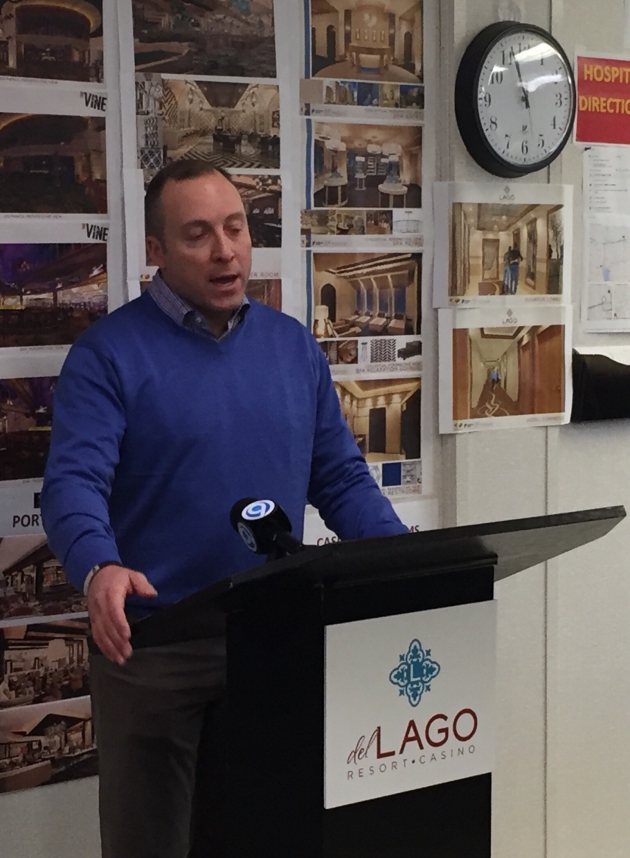 The del Lago Resort & Casino project was toted as a $425 million project when it was first developed. However, the project was billed as a $440 million project at the time of the press conference, which followed the topping off ceremony.Multiple speakers — including Jeff Shipley, president and CEO of the Seneca County Chamber of Commerce, Tyre Town Supervisor Ron McGreevy, as well as Michael Davis, president of the Finger Lakes Building & Construction Trades Council, AFL-CIO. Davis said during the press conference that “I could not be more pleased that hundreds of union tradespeople are working hard and collecting a paycheck.” He continued, “I know that over the coming weeks and months, hundreds more will be working to build del Lago, which will soon be the gateway to the Finger Lakes region.” Supervisor McGreevy spoke to the importance of del Lago in the community as a whole. A new gas station, Chrysler dealership, as well as a potential Dunkin’ Donuts franchise in Tyre are just a few of the things he said are happening, or being floated to the Planning Board in Tyre. He went on to point out that “jobs are being created at a pace unseen before in Seneca County.”Even with all of the work that has been accomplished in just 72 days, since the first piece of steel was set on the site, those workers represent 11 percent of the total workforce needed to complete the facility, according to Davis. He said that the workers at the site are making an estimated $500,000 per week with the union work currently being completed.Collectively, they reflected on the positive response they have received from residents in Tyre, as well as Seneca County.