An innovative snow removal tool that the New York State Department of Transportation is unleashing this winter, might surprise some motorists as winter finally arrives. While New Yorkers are no stranger to snow plows, the changes in snow removal are coming fast-and-furious – as the NYDOT along with the help of Gov. Andrew Cuomo will be deploying a unique set of equipment effective immediately. 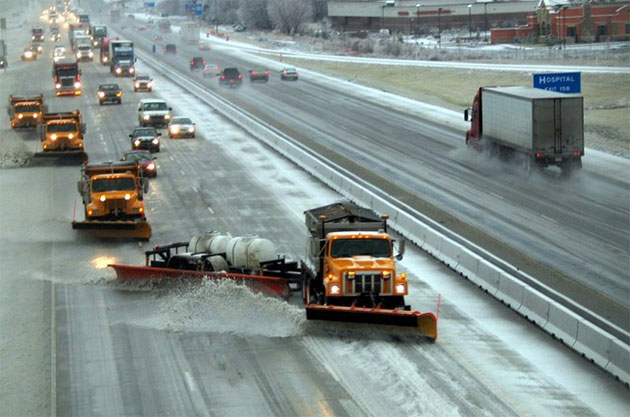 Earlier this year Gov. Cuomo allocated an additional $50 million to preparing for winter here in New York with a focus on our roadways and snow removal. They’re called ‘tow plows’ and just as one might imagine – they involve a secondary plow being towed behind the traditional truck. This will give DOT workers the ability to clear two lanes at once – making the snow removal process far more efficient than it was previously.New York State Department of Transportation Commissioner Matthew Driscoll made the announcement today pointing out that, “The addition of these tow plows will mean a safer New York State for motorists who are out and about during the winter weather. Governor Cuomo has armed the Department with an innovative snow removal tool and we’re ready to respond.”Altogether there will be 62 of these tow plows deployed throughout the state – with every region receiving an allocation of tow plows. The DOT operators are a part of a preparedness team that have been specifically trained on operating these new tow plows. The operation of the tow plow, when it is operational behind the traditional plow – will have more control than the traditional wings, which are deployed to clear the edges of the road during severe winter weather.While areas which frequently encounter severe winter weather in New York State will see most of these new tow plows – they will be calibrated and deployed throughout New York State when winter storms are forecasted to make an impact. The key benefits that the DOT pointed out in their statement was the increased safety for those traveling during the winter season, creating a more efficient reaction throughout the state when extreme events arrive, and most-notably reducing the overall cost associated with snow removal. While the weather in upstate New York has been unseasonably warm – New Yorkers understand that this can change on a dime, and these plows will certainly see their fair share of action this winter.These plows have been in use in Ontario, Cananda and are featured in the video below…The press release from the New York State Department of Transportation can be found here.