Members of Arc of Seneca Cayuga’s Self-Advocacy Group recently presented a check for $200.00 to the Waterloo Volunteer Fire Department. Robert McLean, president of the fire company, accepted the donation, which will help them purchase needed equipment. The donation represents a portion of the proceeds raised during the Self-Advocacy Group’s chicken barbecue fundraiser, held in September.Arc’s Self-Advocacy group is made up of people with intellectual or other developmental disabilities. As a group, they advocate about their rights on such things as benefits, housing, employment and services that they depend on within their community and strongly believe that all people can and should contribute to their communities. Each time the group holds a fundraiser, at least 60% of the proceeds are donated to another not-for-profit organization in Seneca County. To date, the group has donated to the House of Concern in Seneca Falls, Beverly’s Animal Shelter, the Waterloo Volunteer Fire Department, and the Wounded Warrior Project, a military and veterans’ charity service organization. 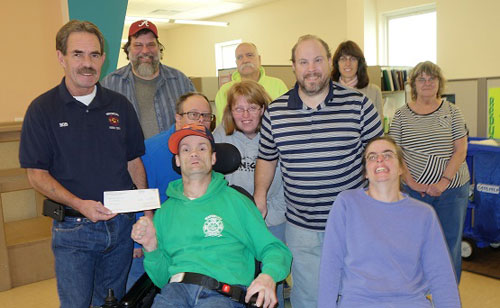