December in the Finger Lakes – it’s a veritable winter wonderland of glistening trees, gleaming waterfalls, and glossy lakes. It’s also when downtown Ithaca holds its beloved Ice Festival, a multi-day, multifaceted celebration that culminates in a nationally-sanctioned ice carving competition where some of the country’s top carvers vie to win over the crowd and take home a hefty prize purse. From December 10-12, 2015, the newly-rebuilt Ithaca Commons pedestrian mall (202 East State Street) will be transformed into a crystalline dreamworld, dotted with scores of exquisitely detailed ice sculptures of all shapes and sizes and crowned with a bar and lounge made of solid ice where visitors can savor beer, wine, or hot cocoa and watch the carvers expertly wield their chisels, chainsaws, and blowtorches. 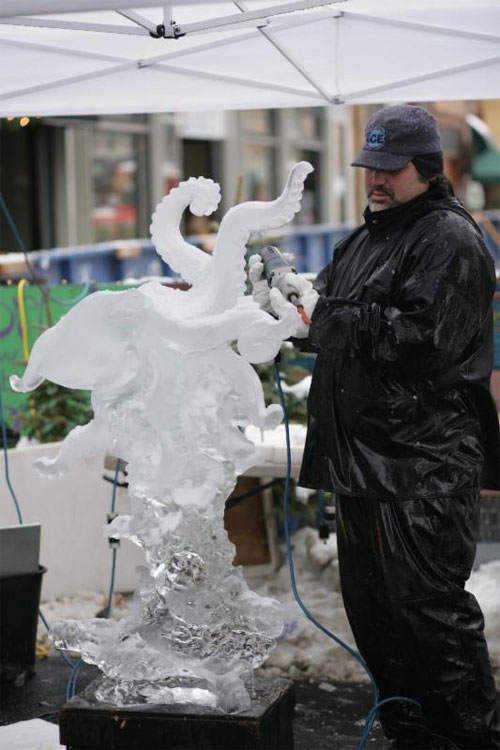 Thursday: Fire and Ice! On December 10 from 5:00-9:00 pm, enjoy the opening evening of the ice bar underneath the Bernie Milton Pavilion. Join Mayor Svante Myrick for a celebratory toast at 6:00 pm to kick off the holiday lights on the Commons – a gift to the community from CFCU Community Credit Union. Starting at 6:30 pm, take in the spectacle of magicians and fire dancers conjuring hot orange flames against the frosty white backdrop. Friday: Race Against the Clock! On December 11 from 5:00-9:00 pm, return to the ice bar from 5:00-9:00 pm and watch the exhilarating Speed Carving event, when a dozen of America’s finest ice carvers, including several national, world, and Olympic champions, go head-to-head and race against the clock to complete a sculpture in just twenty minutes using a limited selection of tools. Saturday: Towering Sculptures, Chowder, Cookies, Dogs! On December 12 from 9:00 am-5:00 pm, witness the Carve and Deliver and Two-Block Showpiece competitions, where the master carvers execute intricate large-scale pieces. Last year, the top-ranked creations were a fantastical finned merman, a Kafkaesque praying mantis, and a night owl taking wing, each of which stood head and shoulders above their sculptors. Beginning at noon, experience the 6th Annual Chowder Cook-Off, a taste bud-tantalizing experience where festival goers can sample chowders and bisques of all varieties – meat, seafood, and vegetarian – served up by dozens of the area’s top chefs. Recipes range from the down home to the exotic; recent offerings have included fire-roasted corn and chicken, clam and local bacon, Moroccan fish tagine, sweet potato kale, and butternut bevy. Samplers vote on their favorite chowders and one lucky chef is awarded the coveted title of Chowdercup Champion. Also not to miss on Saturday: Habitat for Humanity’s Annual Cookie Walk will return to Center Ithaca from 10:00 am-2:00 pm, the ice bar will open at noon, and the Mt. Pleasant Dog Sled Team will do demonstrations from 2:00-4:00 pm! Fun for Locals, Tourists, and Carvers Alike! Says four-time world champion carver Aaron Costic, “The Downtown Ithaca Alliance and the Ice Farm do a fantastic job of organizing this event. It’s a good format and very enjoyable. Ice Wars has been a part of the National Ice Carving Association’s Tour of Champions since 2010 and so it’s a great way for competitive carvers to rack up points to qualify for the National Championship.” Says Trai Sang of Atlantic County, New Jersey, “The talent on display at Ice Wars is amazing, and it’s fun to see power tools used to create such delicate detail. The ice bar is a unique, seasonal way to spend time on the Commons. It’s great to find such joy during the cold winter.” Says longtime Ithacan Eldred Harris, “It’s so energizing to see artisans turn what we all hate in the dead of winter – cold and ice – into these remarkable, ephemeral works of art.” In short, if you’re looking for a great place for holiday shopping, gourmet food and drink, and a unique opportunity to watch first-class artisans in action, look no further than downtown Ithaca. Skip the Lines! Advance tickets for the Chowder Cook-Off will be available starting on Monday, December 7 at the Downtown Visitors Center. Call the Downtown Ithaca Alliance at 607-277-8679 or visit us in Center Ithaca (171 East State Street). Thanks! The Downtown Ithaca Alliance would like to thank the Hilton Garden Inn for their continued support of the Ithaca Festival.