On Monday at 10 am Members of the Geneva Police Department Drug Enforcement Unit ended a 6 month investigation into the sale of crack cocaine by the arrest of Dakota J. McKoy, 26 of 336 Vienna Street in Newark, on Criminal Sale of a Controlled Substance in Third Degree charges after he appeared at Geneva City Court.McKoy was originally scheduled to appear on Criminal Possession of a Controlled Substance 7th Degree and Endangering the Welfare of a Child charges stemming from a September 22nd arrest in the City of Geneva where the he possessed Heroin near a 2 year old child.McKoy was arraigned and will reappear in Geneva City Court on December 3rd at 8:30 am. Additional Felony charges are pending. Held on $25000/$50000. 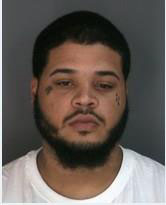