Singer-songwriter Peter Mulvey, who charmed a sold-out concert at Lacey Magruder Winery in 2013, will return to the popular Smith Club Series on Friday, November 13 with a 7:30 pm show at The Left Bank at 24 Linden Street in Geneva.Since the 1990s, Mulvey has developed a strong national following in the indie folk/rock scene through his relentless touring and critically acclaimed albums. Starting his musical career in Milwaukee while at Marquette University, he honed his performing skills while traveling in Dublin, Ireland. He later spent several years in Boston, where he frequently performed in the city’s subway system. He is best known for his warmly wry songwriting and his intense percussive guitar style. 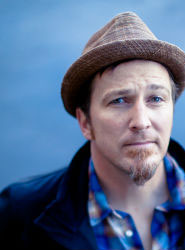 Mulvey is the first artist to come for a return engagement for the Smith Club Series offered by the Smith Center for the Arts. The Club Series are small shows that are designed to bring important touring artists to smaller more intimate venues in Geneva and the Finger Lakes. This will be the first concert the series has presented at The Left Bank. Tickets, $20 and $22 on the day of show, are available at the smith.org, or at the Smith Opera House Box Office, 82 Seneca Street, Geneva, (315) 781-5483. Box Office Hours are Monday through Friday, 10 am to 5 pm and Saturday 10 am to 2 pm. Email: boxoffice@thesmith.org For event listing and more information about The Smith and The Smith Center For The Arts, visit our website the smith.org